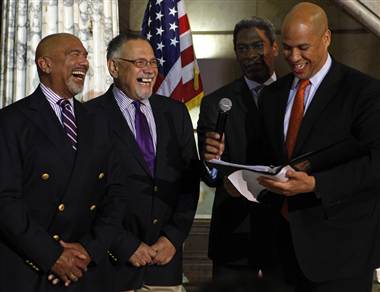 “It is officially past midnight, marriage is now equal in New Jersey,” Booker said to applause and cheers.

Booker, who had never officiated a wedding since becoming Newark mayor in 2006, called the occasion one of “the greatest privileges and honors” and “one of the most magical moments” of his life.

On Friday, the state Supreme Court refused to delay a lower court order for the state to begin recognizing same-sex marriages. Mayors in cities and towns including Newark, Jersey City, Red Bank, Asbury Park and Lambertville opened their city halls late Sunday to marry couples as soon as possible.