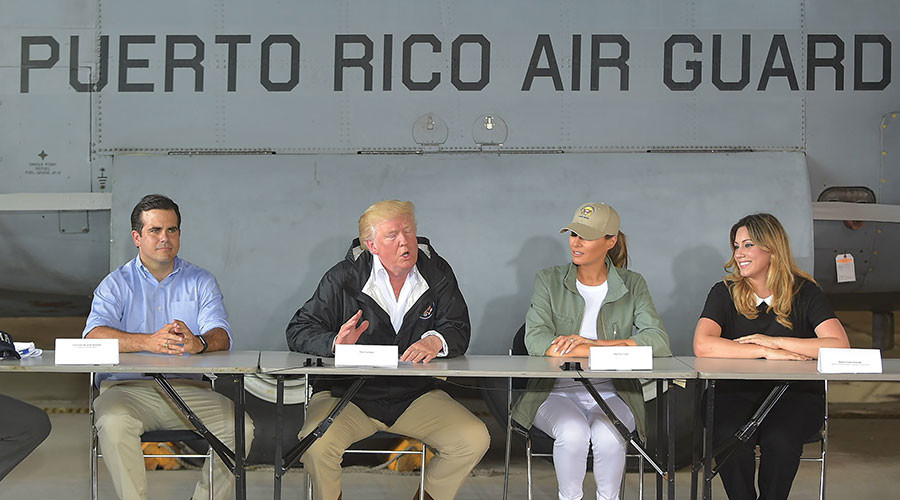 US President Donald Trump said that Puerto Rico’s $74 billion debt would have to be wiped out to help the island recover from the catastrophic damage caused by Hurricane Maria that he witnessed during his visit.

“We’re going to work something out. We have to look at their whole debt structure. You know they owe a lot of money to your friends on Wall Street and we’re going to have to wipe that out. You’re going to say goodbye to that, I don’t know if it’s Goldman Sachs but whoever it is you can wave goodbye to that,” Trump told Fox News, according to Reuters.

During his visit, Trump said that the reconstruction costs have thrown the federal budget “out of whack.”

“I hate to tell you, Puerto Rico, but you’ve thrown our budget out of whack – because we have spent a lot of money on Puerto Rico. And that’s fine, we’ve saved a lot of lives,” Trump said.

‘You can be very proud’: #Trump praises hurricane relief in #PuertoRicohttps://t.co/GTsJKZfepbpic.twitter.com/tbj8mP4d9z

Moodys estimated that the recovery could cost as much as $95 billion, according to Reuters.

In May, Puerto Rico filed for the biggest bankruptcy in US municipal history, approximately $74 billion of bond debt and $48 billion of unfunded pension liabilities. The bankruptcy would break the record in the US, which was previously set by the $18 billion Chapter 9 claim by Detroit, Michigan in 2013.

The island’s economy has been in recession for nearly 10 years, with an unemployment rate of about 11 percent. At the same time, the population has fallen by about 10 percent in the past decade.

According to census data taken before the storm hit Puerto Rico, unemployment on the island was about 11 percent, while the poverty rate stood at 45 percent. The average income was $19,350, compared the the average income of the entire US, which stands at $56,516.

The White House is also reportedly preparing a $29 billion disaster aid request to support recovery efforts in Puerto Rico, Texas and Florida, according to Reuters.

The White House will ask Congress to fund $13 billion in new relief for hurricane victims and to forgive $16 billion in debt that has accumulated in the National Flood Insurance Program.

The request is expected to be sent to lawmakers in Congress by Wednesday.

After Trump left the island, Puerto Rico Governor Ricardo Rossello updated the official death toll from 16 to 34. Rossello said that the main causes of death were flooding, flying debris and mudslides.

The death toll is expected to increase further in the coming weeks.