Scores of A-list celebs have reached out to a young Knoxville, Tennessee boy who shared a heartbreaking video recounting his experience of being bullied at school – but past photos of the boy’s family posing with the Confederate flag has caused some to debate whether African Americans celebs should voice their support.

Cardi B, Snoop Dogg, Rihanna, Heather Headley and a number of black athletes have joined the multitude of famous names supporting elementary school student Keaton Jones. On Friday, his mom, Kimberly Jones, posted his tearful video on Facebook, shortly after picking up Keaton from school because he was too afraid and upset to go to lunch. Keaton describes having milk poured on him and being called ugly for the head scars left from a tumor operation.

“Just out of curiosity, why do they bully?,” Keaton asks. “What’s the point of it? Why do you find joy in taking innocent people and finding a way to be mean to ’em? It’s not okay. It’s not okay! People that are different don’t need to be criticized about it. It’s not their fault.” The boy also says, “They make fun of my nose. They call me ugly. They say I have no friends.”

In a message accompanying the video, Kimberly Jones wrote, “My kids are by no stretch perfect, and at home, he’s as all boy as they come, but by all accounts he’s good at school. Talk to your kids. I’ve even had friends of mine tell me kids were only nice to him to get him to mess with people. We all know how it feels to want to belong, but only a select few know how it really feels not to belong anywhere.”

Within 24 hours, the FB post had racked up more than 10 million views and is closing in on 20 million. Stars like Jennifer Lopez, Justin Bieber, Mark Ruffalo, Chris Evans, Eva Longoria, Millie Bobby Brown, Hailee Steinfeld came out in droves to tweet Keaton messages of support. Many prominent African Americans from Hollywood, music, sports and politics were among those coming to his defense.

“I’m so Sad and angry like I’m OD hot 😡😪Please teach your kids not to be bullies,” Cardi B. tweeted in response. “Teach them how to be tough 👊🏽but not too pick on others.”

I’m so Sad and angry like I’m OD hot

Please teach your kids not to be bullies .Teach them how to be tough

but not too pick on others

Bernice King tweeted: “You may have heard of my parents, Dr. Martin Luther King, Jr. (#MLK) and #CorettaScottKing. I try to honor them and their legacies. I’m so sorry about the pain you’re experiencing because of bullying. You matter. I love you.”

@Lakyn_Jones Hello, Keaton (via your sister)! You may have heard of my parents, Dr. Martin Luther King, Jr. (#MLK) and #CorettaScottKing. I try to honor them and their legacies. I’m so sorry about the pain you’re experiencing because of bullying. You matter. I love you.

Snoop Dogg also reached out to Keaton, saying, “Lil Man U gotta friend in me for life hit me on dm so we can chop it up love is the only way to beat hate 👊🏾☝🏾”

But things took a left turn on Monday.

As the video continued to pick up steam, Keaton and his family were discovered to be proud confederate-flag owners, and the conversation online inevitably shifted.

Twitter uses began digging up receipts showing Keaton’s mom being quite hostile on Facebook regarding African American protesters back in August. 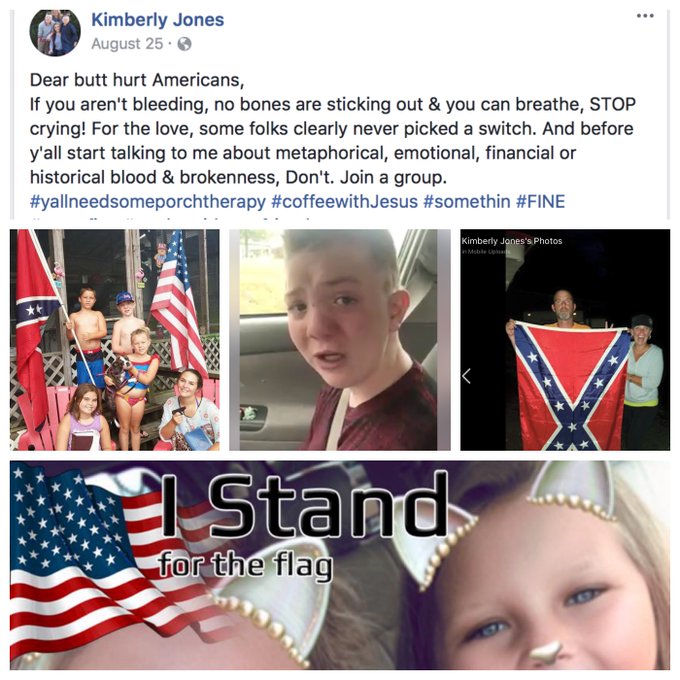 That viral video of #KeatonJones talking about being bullied is heartbreaking, and I feel sympathetic towards that child.
But his mom, Kimberly on the other hand, is a suspected racist who makes very problematic posts bullying Black protesters #TheIrony

A comment in Snoop’s Instagram repost of Keaton’s video read: “Take this s**t down snoop. He being raised up to be a racist but black people sticking there necks out once again instead if worrying about ourselves.”

And the debate was off and running…