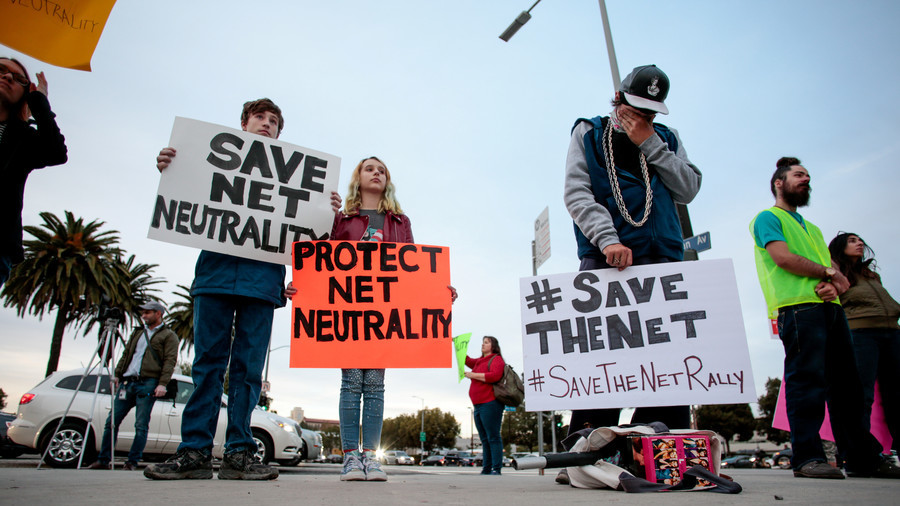 Amazon, Netflix, Facebook and many other tech giants have blasted Congress’ decision to repeal net neutrality, branding it ‘harmful’ for all internet users.

“I am extremely disappointed in the FCC decision to remove the #NetNeutrality protections,” wrote Amazon’s Chief Technology Officer Werner Vogels on Twitter. “We’ll continue to work with our peers, partners and customers to find ways to ensure an open and fair internet that can continue to drive massive innovation.”

“Today’s decision from the Federal Communications Commission to end net neutrality is disappointing and harmful. An open internet is critical for new ideas and economic opportunity – and internet providers shouldn’t be able to decide what people can see online or charge more for certain websites,” said Sheryl Sandberg, Facebook’s chief operating officer.

“We’re disappointed in the decision to gut #NetNeutrality protections that ushered in an unprecedented era of innovation, creativity & civic engagement. This is the beginning of a longer legal battle. Netflix stands w/ innovators, large & small, to oppose this misguided FCC order,” Netflix tweeted.

Mozilla called the vote an “unsurprising, unfortunate disappointment” in a statement against the rollback, Vimeo labelled it as “disheartening”. Microsoft Chief Legal Officer Brad Smith said the decision “jeopardizes” the benefits of an open internet.

Reddit co-founder Alexis Ohanian shared an example from the telecommunications market in Portugal and Spain in which specific apps are included as add-on data package plans and wrote: “We cannot let this happen to our internet in the US.”

If the rollback goes ahead – it will take effect 60 days after publication in the Federal Register, which could take a minimum of six weeks after the FCC vote, and several states have already filed against the FCC decision – ISPs will be able to control accessibility to certain websites.

For example, if Verizon buys Yahoo!, they would be legally allowed to charge users to access Google or facilitate a faster loading time/improved quality when visiting a certain webpage.

FCC Chairman for the Trump administration Ajit Pai has previously expressed his dislike for net neutrality and argued that the regulations discouraged ISP from investing in their networks or expanding to rural areas.

“I sincerely doubt that legitimate businesses are willing to subject themselves to a PR nightmare for attempting to engage in blocking, throttling, or improper discrimination. It is simply not worth the reputational cost and potential loss of business,” said Commissioner Mike O’Rielly who also voted to overturn the protections.

For what it’s worth Verizon, AT&T (which is seeking to buy Time Warner, the parent company of CNN) and the US Telecom and Broadband Association have all spoken out against the proposed law change and promise to uphold the unbiased market.

“We do not block websites, nor censor online content, nor throttle or degrade traffic based on the content, nor unfairly discriminate in our treatment of internet traffic,” said a spokesperson for AT&T in a statement.

“These principles, which were laid out in the FCC’s 2010 Open Internet Order and fully supported by AT&T, are clearly articulated on our website and are fully enforceable against us. In short, the internet will continue to work tomorrow just as it always has.”

“Verizon fully supports the open Internet, and we will continue to do so,” said Verizon’s Senior Vice President of Regulatory Affairs Will Johnson. “Our customers demand it and our business depends on it.”

“Today, the future of our open, thriving internet has been secured,” wrote the US Telecom and Broadband Association.

“America’s broadband providers – who have long supported net-neutrality protections and have committed to continuing to do so – will have renewed confidence to make the investments required to strengthen the nation’s networks and close the digital divide, especially in rural communities.”