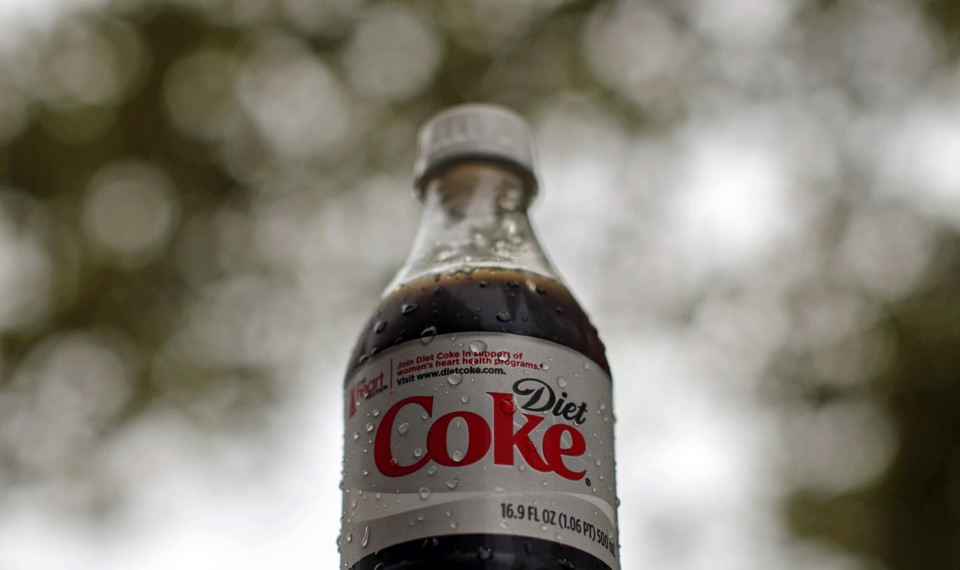 With sales of Diet Coke in a prolonged rut, Coca-Cola announced last Wednesday that it is tweaking the design of its most famous zero-calorie soft-drink can to be more slender and colorful. It is also launching several new flavors of Diet Coke, including “Feisty Cherry,” “Twisted Mango,” and “Zesty Blood Orange.”

“You don’t mess with a good thing,” Coca-Cola said in its statement. But, quite to the contrary, Coca-Cola is in a near-permanent state of messing with its things. The first version of Diet Coke debuted in 1982. The very next year, the company released a caffeine-free Diet Coke, and a cherry-flavored variety followed in 1986. This century, several more flavors have joined the family, including lemon, vanilla, lime, black cherry, and raspberry.

These changes—in addition, of course, to the old standards—amounted to a winning formula. At the peak of soft-drink consumption in the mid-2000s, America consumed 53 gallons of soda per person each year—more than half a liter, per person, per day.

But soda’s prospects have since fizzled. Diet Coke may still be the second-most popular soda in the country, but soft-drink consumption has declined every year this decade, according to an analysis shared with The Atlantic by the research group IBISWorld. In its last annual report, Coca-Cola said that the volume of Diet Coke sold in North America declined by 5 percent—more than any other Coca-Cola beverage brand identified in the report.

It’s not hard to understand Diet Coke’s imploding popularity: The diet beverage is suffering both as a diet product and as a beverage.

A growing consumer focus on health has clearly dented soda’s dominion. Beyond widespread concerns of the dangers of artificial sweeteners, government research has found that daily drinkers of diet soda are at higher risk for strokes and other “vascular events.” While Diet Coke’s new can designs are tall and slender—a possible reference to the body type a diet-beverage drinker seeks—more of them simply don’t trust any kind of soda to be a part of a healthy diet. Between 2000 and 2015, switching from sodas to other beverages saved the country an estimated 64 trillion calories in total—that works out to 71 fewer calories per day, per drinker.

At the same time that academics have questioned the health effects of soda, the U.S. has undergone a profound change in its taste for liquids, in three major ways.

First, bottled water has transformed from an ecologically dubious ordinary consumer product to an ecologically dubious economic juggernaut. Since 2000, bottled-water consumption has tripled. In 2016, the volume of it consumed surpassed that of soda in the United States for the first time ever, according to data from the Beverage Marketing Corporation (BMC). Meanwhile, related categories such as flavored water and flavored seltzer water have grown even faster, albeit from a much smaller base. Sales of so-called “value-added” water, like Coca-Cola’s vitaminwater, have grown by nearly 3,000 percent since the turn of the century, according to BMC. The flavored-seltzer market is growing by more than 10 percent annually, with the top five brands—Sparkling Ice, LaCroix, Perrier, San Pellegrino, and Polar—now accounting for $1.2 billion in yearly sales.

Second, whereas many Americans once turned to Diet Coke to power their afternoons, these days the market for energy-giving beverages is crowded. At the peak of Diet Coke craze, in the early 2000s, soft drinks outsold coffee by a three-to-one margin in the U.S. But thanks to rising coffee consumption (and coffee’s high price, relative to soda), the U.S. coffee industry is on track to surpass domestic soda sales sometime in the early 2020s. Meanwhile, sales of energy drinks in the U.S. have grown by more than 5,000 percent this century, according to analysis from the BMC.

Finally, while Diet Coke is still one of the most popular sodas in the country, it’s losing market share to more-flavorful beverages. Many drinkers prefer the richer taste of classic Coca-Cola, which is still growing worldwide. Sales of Sprite and Fanta are also rising in the U.S., according to Coca-Cola’s financial reports. Research has shown that black cans and avoiding the word diet in beverage titles lures male consumers; indeed, the black-bottled Coca-Cola Zero Sugar is growing at Diet Coke’s expense.

But slender bottles with streaks of color probably won’t arrest Diet Coke’s demise. As the Harvard business professor and author Clayton Christensen has written, products and customers have certain “jobs” that need to be done. One could argue that, in the last decade, all of the jobs of Diet Coke are being outsourced to superior beverages. The role of hydration has been outsourced to bottled water and sports drinks, like Gatorade. Getting a jolt of energy has been outsourced to coffee and energy drinks, like 5-Hour Energy. And the satisfaction of a cold liquid fizzing on one’s tongue? That’s been outsourced to the trendy crop of flavored seltzers, like LaCroix. In the end, it probably doesn’t matter what the Diet Coke can looks like. Young people know what’s inside the can. Perhaps that’s precisely why they’re drinking so much less of it.