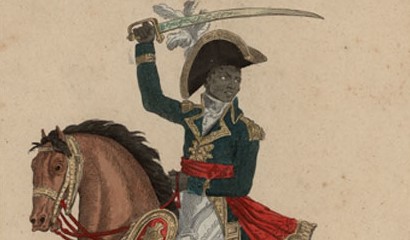 In case you missed it, the President of the United States called Haiti, El Salvador, and African countries “shitholes,” then pretended like he didn’t say it, but basically said it all over again.

This matters not just because it’s racist (the President is racist, in fact, he is professionally racist), because it’s vulgar (“shithole,” one of the all-time great swear words, is forever sullied by this), and because it’s catastrophically bad for foreign and domestic relations. It matters in part because of the history of Haiti, and the history of racist discourse about Haiti.

The reason why White nationalists like 45 always name Haiti because the Haitian nation & people are unique. Haiti defeated Napoleon, threw off the chains of slavery, and exposed the lie of White supremacy & European imperialism. So there’s no end to their hatred for Haiti.

Jonathan Katz, a journalist and former AP correspondent in Haiti who wrote The Big Truck That Went By about Haiti’s 2010 earthquake and the cholera epidemic that followed, has a longer thread spelling out how these narratives about Haiti were generated and how they work. Here’s a thick excerpt:

In order to do a victory lap around the GDP difference between, say, Norway and Haiti, you have to know nothing about the history of the world. That includes, especially, knowing nothing real about the history of the United States… You’d have to not know that the French colony that became Haiti provided the wealth that fueled the French Empire — and 2/3 of the sugar and 3/4 of the coffee that Europe consumed…

You’d then have to not know that Haiti was forced to borrow some money to pay back that ridiculous debt, some of it from banks in the United States. And you’d have to not know that in 1914 those banks got President Wilson to send the US Marines to empty the Haitian gold reserve… [You’d] have to not know about the rest of the 20th century either—the systematic theft and oppression, US support for dictators and coups, the US invasions of Haiti in 1994-95 and 2004…

In short, you’d have to know nothing about WHY Haiti is poor (or El Salvador in kind), and WHY the United States (and Norway) are wealthy. But far worse than that, you’d have to not even be interested in asking the question. And that’s where they really tell on themselves… Because what they are showing is that they ASSUME that Haiti is just naturally poor, that it’s an inherent state borne of the corruption of the people there, in all senses of the word.

And let’s just say out loud why that is: It’s because Haitians are black.

If Haiti is a shithole, then they can say that black freedom and sovereignty are bad. They can hold it up as proof that white countries—and what’s whiter than Norway—are better, because white people are better. They wanted that in 1804, and in 1915, and they want it now.

The history of Haiti is weird because it is absurdly well-documented, yet totally poorly known. It’s hard not to attribute that to ideology. We don’t teach the Haitian Revolution the way we teach the American, or the French, or the Mexican, because it’s a complicated story. Kids are more likely to hear variations of “Haiti formed a pact with the devil to defeat Napoleon” (this is real thing, I swear) than Toussaint Louverture’s or Jean-Jacques Dessalines’s names.

Also, while Haiti’s revolution was an early, signature event in world history-the first time a European power would be overthrown by an indigenous army (but not the last)-the causes of Haiti’s poverty are basically identical with those of almost every poor nation around the world: a history of exploitation, bad debt, bad geopolitics, and bad people profiting off of that poverty (almost all of them living elsewhere). And this is basically true about poverty in American cities as well (with all the same attendant racist myths).