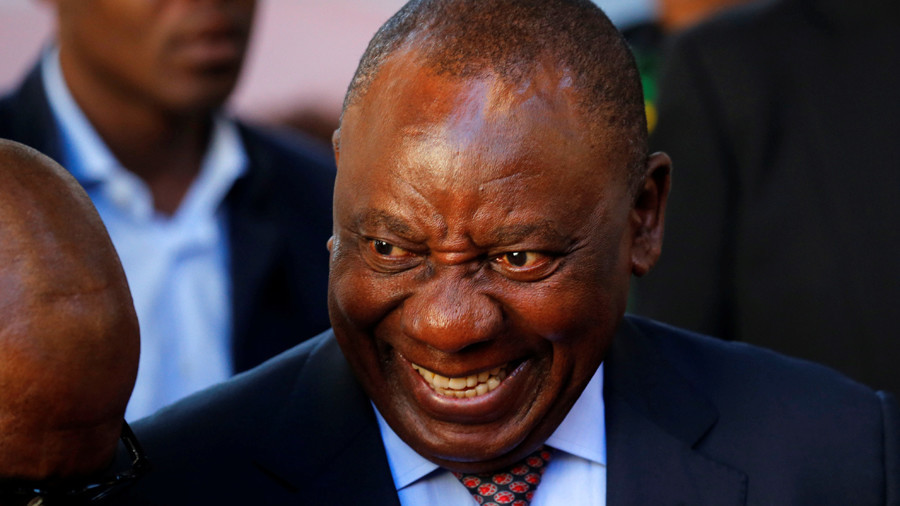 South African President Cyril Ramaphosa © Mike Hutchings / Reuters
South Africa’s new president, Cyril Ramaphosa, has pledged to return the lands owned by white farmers since the 1600s to the black citizens of the country.
The government plans to accelerate land redistribution through expropriation without compensation.
“The expropriation of land without compensation is envisaged as one of the measures that we will use to accelerate the redistribution of land to black South Africans,” said Ramaphosa, who was sworn into office to succeed Jacob Zuma as president last week.
The millionaire ex-businessman Ramaphosa promised that land expropriation operations will not be a “smash and grab” exercise and promised to handle the matter properly, adding that people “must see this process as an opportunity.”
“No-one is saying that land must be taken away from our people,” he said, “Rather, it is how we can make sure that our people have equitable access to land and security of tenure. We must see this process of accelerated land redistribution as an opportunity and not as a threat,” he added during a speech to parliament on Tuesday.
Such a drastic move would not damage the country’s agriculture or economy, the South African president promised.
“We will handle it with responsibility. We will handle it in a way that will not damage our economy, that is not going to damage agricultural production,” he said.
More than two decades after the end of apartheid in the 1990s, the ruling African National Congress (ANC) party is under pressure to tackle racial disparities in land ownership in South Africa. The country is home to over 50 million people, with whites owning most of the land.
According to a recent study, black South Africans constitute 79 percent of the population, but directly own only 1.2 percent of the country’s rural land. Meanwhile, white South Africans, who constitute 9 percent of the country’s population, directly own 23.6 percent of its rural land, and 11.4 percent of land in towns and cities, according to the Land Audit report.
A similar program of land redistribution was carried out by then-Zimbabwean President Robert Mugabe in the late 1990s and early 2000s. Thousands of white farmers were forced from their lands.
However, food production plummeted without the experienced farmers’ contribution, and Zimbabwe’s economy suffered massively. In 2010, the Guardian reported that Mugabe used land reform to reward his allies rather than ordinary black Zimbabweans. In 2016, Mugabe signed a decree that foreign companies would face closure unless they sold or gave up 51 percent of their shares.
Speaking about the redistribution of land in his country, Ramaphosa said that “in dealing with this complex matter” South Africa would not “make the mistakes that others have made.”
From RT
Posted by The NON-Conformist