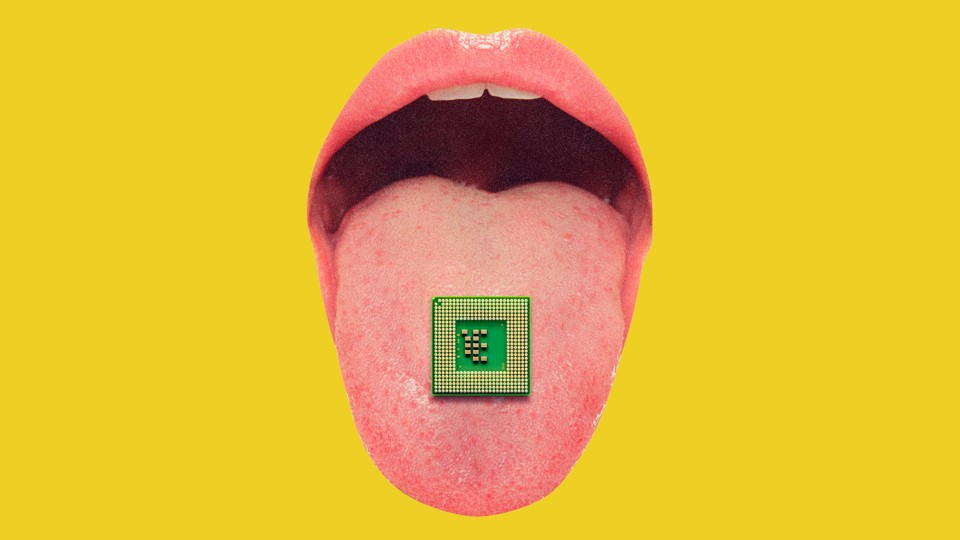 In a dank corner of the internet, it is possible to find actresses from Game of Thrones or Harry Potter engaged in all manner of sex acts. Or at least to the world the carnal figures look like those actresses, and the faces in the videos are indeed their own. Everything south of the neck, however, belongs to different women. An artificial intelligence has almost seamlessly stitched the familiar visages into pornographic scenes, one face swapped for another. The genre is one of the cruelest, most invasive forms of identity theft invented in the internet era. At the core of the cruelty is the acuity of the technology: A casual observer can’t easily detect the hoax.
This development, which has been the subject of much hand-wringing in the tech press, is the work of a programmer who goes by the nom de hack “deepfakes.” And it is merely a beta version of a much more ambitious project. One of deepfakes’s compatriots told Vice’s Motherboard site in January that he intends to democratize this work. He wants to refine the process, further automating it, which would allow anyone to transpose the disembodied head of a crush or an ex or a co-worker into an extant pornographic clip with just a few simple steps. No technical knowledge would be required. And because academic and commercial labs are developing even more-sophisticated tools for non-pornographic purposes—algorithms that map facial expressions and mimic voices with precision—the sordid fakes will soon acquire even greater verisimilitude.

The internet has always contained the seeds of postmodern hell. Mass manipulation, from clickbait to Russian bots to the addictive trickery that governs Facebook’s News Feed, is the currency of the medium. It has always been a place where identity is terrifyingly slippery, where anonymity breeds coarseness and confusion, where crooks can filch the very contours of selfhood. In this respect, the rise of deepfakes is the culmination of the internet’s history to date—and probably only a low-grade version of what’s to come.
Vladimir Nabokov once wrote that reality is one of the few words that means nothing without quotation marks. He was sardonically making a basic point about relative perceptions: When you and I look at the same object, how do you really know that we see the same thing? Still, institutions (media, government, academia) have helped people coalesce around a consensus—rooted in a faith in reason and empiricism—about how to describe the world, albeit a fragile consensus that has been unraveling in recent years. Social media have helped bring on a new era, enabling individuated encounters with the news that confirm biases and sieve out contravening facts. The current president has further hastened the arrival of a world beyond truth, providing the imprimatur of the highest office to falsehood and conspiracy.

But soon this may seem an age of innocence. We’ll shortly live in a world where our eyes routinely deceive us. Put differently, we’re not so far from the collapse of reality.
We cling to reality today, crave it even. We still very much live in Abraham Zapruder’s world. That is, we venerate the sort of raw footage exemplified by the 8 mm home movie of John F. Kennedy’s assassination that the Dallas clothier captured by happenstance. Unedited video has acquired an outsize authority in our culture. That’s because the public has developed a blinding, irrational cynicism toward reporting and other material that the media have handled and processed—an overreaction to a century of advertising, propaganda, and hyperbolic TV news. The essayist David Shields calls our voraciousness for the unvarnished “reality hunger.”
Scandalous behavior stirs mass outrage most reliably when it is “caught on tape.” Such video has played a decisive role in shaping the past two U.S. presidential elections. In 2012, a bartender at a Florida fund-raiser for Mitt Romney surreptitiously hit record on his camera while the candidate denounced “47 percent” of Americans—Obama supporters all—as enfeebled dependents of the federal government. A strong case can be made that this furtively captured clip doomed his chance of becoming president. The remarks almost certainly would not have registered with such force if they’d merely been scribbled down and written up by a reporter. The video—with its indirect camera angle and clink of ambient cutlery and waiters passing by with folded napkins—was far more potent. All of its trappings testified to its unassailable origins.

Donald Trump, improbably, recovered from the Access Hollywood tape, in which he bragged about sexually assaulting women, but that tape aroused the public’s passions and conscience like nothing else in the 2016 presidential race. Video has likewise provided the proximate trigger for many other recent social conflagrations. It took extended surveillance footage of the NFL running back Ray Rice dragging his unconscious wife from a hotel elevator to elicit a meaningful response to domestic violence from the league, despite a long history of abuse by players. Then there was the 2016 killing of Philando Castile by a Minnesota police officer, streamed to Facebook by his girlfriend. All the reports in the world, no matter the overwhelming statistics and shattering anecdotes, had failed to provoke outrage over police brutality. But the terrifying broadcast of his animalistic demise in his Oldsmobile rumbled the public and led politicians, and even a few hard-line conservative commentators, to finally acknowledge the sort of abuse they had long neglected.

That all takes us to the nub of the problem. It’s natural to trust one’s own senses, to believe what one sees—a hardwired tendency that the coming age of manipulated video will exploit. Consider recent flash points in what the University of Michigan’s Aviv Ovadya calls the “infopocalypse”—and imagine just how much worse they would have been with manipulated video. Take Pizzagate, and then add concocted footage of John Podesta leering at a child, or worse. Falsehoods will suddenly acquire a whole new, explosive emotional intensity.
But the problem isn’t just the proliferation of falsehoods. Fabricated videos will create new and understandable suspicions about everything we watch. Politicians and publicists will exploit those doubts. When captured in a moment of wrongdoing, a culprit will simply declare the visual evidence a malicious concoction. The president, reportedly, has already pioneered this tactic: Even though he initially conceded the authenticity of the Access Hollywood video, he now privately casts doubt on whether the voice on the tape is his own.

In other words, manipulated video will ultimately destroy faith in our strongest remaining tether to the idea of common reality. As Ian Goodfellow, a scientist at Google, told MIT Technology Review, “It’s been a little bit of a fluke, historically, that we’re able to rely on videos as evidence that something really happened.”
The collapse of reality isn’t an unintended consequence of artificial intelligence. It’s long been an objective—or at least a dalliance—of some of technology’s most storied architects. In many ways, Silicon Valley’s narrative begins in the early 1960s with the International Foundation for Advanced Study, not far from the legendary engineering labs clumped around Stanford. The foundation specialized in experiments with LSD. Some of the techies working in the neighborhood couldn’t resist taking a mind-bending trip themselves, undoubtedly in the name of science. These developers wanted to create machines that could transform consciousness in much the same way that drugs did. Computers would also rip a hole in reality, leading humanity away from the quotidian, gray-flannel banality of Leave It to Beaver America and toward a far groovier, more holistic state of mind. Steve Jobs described LSD as “one of the two or three most important” experiences of his life.

Fake-but-realistic video clips are not the end point of the flight from reality that technologists would have us take. The apotheosis of this vision is virtual reality. VR’s fundamental purpose is to create a comprehensive illusion of being in another place. With its goggles and gloves, it sets out to trick our senses and subvert our perceptions. Video games began the process of transporting players into an alternate world, injecting them into another narrative. But while games can be quite addictive, they aren’t yet fully immersive. VR has the potential to more completely transport—we will see what our avatars see and feel what they feel. Several decades ago, after giving the nascent technology a try, the psychedelic pamphleteer Timothy Leary reportedly called it “the new LSD.”

Life could be more interesting in virtual realities as the technology emerges from its infancy; the possibilities for creation might be extended and enhanced in wondrous ways. But if the hype around VR eventually pans out, then, like the personal computer or social media, it will grow into a massive industry, intent on addicting consumers for the sake of its own profit, and possibly dominated by just one or two exceptionally powerful companies. (Facebook’s investments in VR, with its purchase of the start-up Oculus, is hardly reassuring.)
The ability to manipulate consumers will grow because VR definitionally creates confusion about what is real. Designers of VR have described some consumers as having such strong emotional responses to a terrifying experience that they rip off those chunky goggles to escape. Studies have already shown how VR can be used to influence the behavior of users after they return to the physical world, making them either more or less inclined to altruistic behaviors.

Researchers in Germany who have attempted to codify ethics for VR have warned that its “comprehensive character” introduces “opportunities for new and especially powerful forms of both mental and behavioral manipulation, especially when commercial, political, religious, or governmental interests are behind the creation and maintenance of the virtual worlds.” As the VR pioneer Jaron Lanier writes in his recently published memoir, “Never has a medium been so potent for beauty and so vulnerable to creepiness. Virtual reality will test us. It will amplify our character more than other media ever have.”

Perhaps society will find ways to cope with these changes. Maybe we’ll learn the skepticism required to navigate them. Thus far, however, human beings have displayed a near-infinite susceptibility to getting duped and conned—falling easily into worlds congenial to their own beliefs or self-image, regardless of how eccentric or flat-out wrong those beliefs may be. Governments have been slow to respond to the social challenges that new technologies create, and might rather avoid this one. The question of deciding what constitutes reality isn’t just epistemological; it is political and would involve declaring certain deeply held beliefs specious.
Few individuals will have the time or perhaps the capacity to sort elaborate fabulation from truth. Our best hope may be outsourcing the problem, restoring cultural authority to trusted validators with training and knowledge: newspapers, universities. Perhaps big technology companies will understand this crisis and assume this role, too. Since they control the most-important access points to news and information, they could most easily squash manipulated videos, for instance. But to play this role, they would have to accept certain responsibilities that they have so far largely resisted.

In 2016, as Russia used Facebook to influence the American presidential election, Elon Musk confessed his understanding of human life. He talked about a theory, derived from an Oxford philosopher, that is fashionable in his milieu. The idea holds that we’re actually living in a computer simulation, as if we’re already characters in a science-fiction movie or a video game. He told a conference, “The odds that we’re in ‘base reality’ is one in billions.” If the leaders of the industry that presides over our information and hopes to shape our future can’t even concede the existence of reality, then we have little hope of salvaging it.