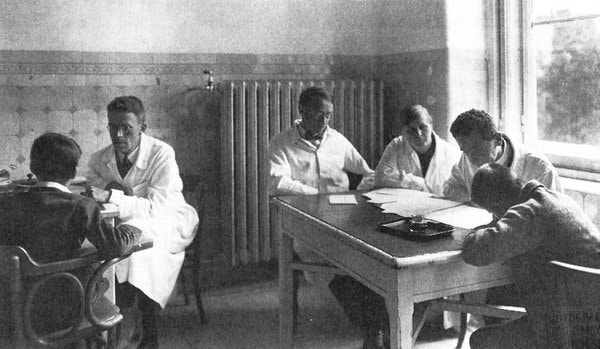 Hans Asperger, left, working with a boy in the Curative Education Clinic in Vienna.CreditPictorial Press

In February 1981, a British psychiatrist named Lorna Wing published an academic paper highlighting a 1944 clinical account of “autistic psychopathy” by a recently deceased Austrian physician named Hans Asperger. It wasn’t an obvious piece of work to single out: As Wing acknowledged, Asperger’s study had received almost no attention from English-language researchers in the decades since publication.

That was about to change. Wing argued that the disorder that Asperger had described was a unique syndrome, distinct from autism, and should be considered as one of “a wider group of conditions which have, in common, impairment of development of social interaction, communication and imagination.” Wing, whose daughter had been diagnosed with autism in the 1950s, understood from her own experience that this was a disorder with multiple gradations, which affected people across the full spectrum of intellectual abilities. But this was a radical notion: At the time, one of the dominant paradigms for understanding autism was that the condition was caused by “refrigerator mothers” — emotionally frigid women who were not warm enough to nurture developing children.

It’s impossible to know why Wing chose to ground her report in Asperger’s rather flimsy research — his paper, after all, had referenced just four patients — rather than relying solely on her own, significantly more impressive work. (It is worth pointing out that then, as now, virtually all eponymous psychiatric conditions were named after men.) Whatever her motivation, Wing’s efforts were successful: “Asperger’s syndrome,” the term she proposed, soon entered the clinical vernacular. By the 1990s, it was recognized around the world as an accepted diagnosis — and autism was no longer viewed as a singular condition.

Wing, who died in 2014, spent the rest of her life as one of the world’s leading autism researchers and advocates. Asperger, on the other hand, after 1945 and until his death 35 years later, didn’t do any significant research on the condition that would bear his name. But it was Asperger, and not Wing, who came to be seen as the patron saint of the neurodiversity movement.

That could be about to change. In April, an Austrian historian named Herwig Czech published evidence of Asperger’s long-rumored collaboration with Third Reich murderers during World War II. Specifically, Czech uncovered proof that in 1942, Asperger was one of the members of a commission that screened and classified more than 200 Viennese children with mental disabilities. Thirty-five of the children in that pool were labeled “uneducable” and “unemployable”; as a result, they were sent to the notorious Am Spiegelgrund clinic, where they were ultimately slaughtered.

The historian Edith Sheffer’s new book, “Asperger’s Children: The Origins of Autism in Nazi Vienna,” builds and elaborates on these new revelations. (While Czech had not yet published his findings when Sheffer’s book went to press, he did give her access to his research.) But Sheffer has larger goals than highlighting Asperger’s complicity in wartime atrocities; she also wants to upend notions of autism as a legitimate diagnostic category by locating its source in Nazi notions of mental health and sickness.

Sheffer starts her narrative in the early 1940s, with Asperger examining one of the children he would highlight in his 1944 paper, before pulling back to describe the milieu in which Asperger operated. She is at her best when she unpacks how the Third Reich created what she calls a “diagnosis regime” by labeling anyone who disagreed in any way with Nazi aims, achievements, or ideology as being fundamentally ill. This was done primarily through the use of two catchall terms: Volk, which referred to the importance of the German national character and its people, and Gemüt, a word the Nazis used to indicate a person’s “fundamental capacity to form deep bonds with other people.” Viewing the world through these lenses led to the medicalization of any and all dissent: Anything less than full-throated chauvinism meant a person was deficient in Gemüt, which, in turn, was potentially damaging to the Volk. The most primal end to this line of thinking was that threats to the Volk had to be exterminated.

Sheffer’s account of the “program of systematic child killing” that grew out of this mind-set is chilling. Starting in the summer of 1939, a Nazi decree mandated that all physicians, nurses, and midwives report any child under 3 with mental or physical disabilities. Sheffer goes on to explain: “The children would enter one of the Reich’s 37 ‘special children’s wards’ for observation and, regularly, medical murder.” Her descriptions of children’s pleading letters home or parents’ confusion as to their children’s sudden deaths are devastating in their routine matter-of-factness.

Sheffer’s pivot from describing deadly Nazi conceptions of community to Asperger’s complicity with the Reich’s killing machine is less effective. Because Asperger did not have a direct hand in any of the more than 700 children who were murdered in the regime’s child euthanasia program, she is left relying on conditionals and suppositions: An educational society Asperger helped found “may have disseminated the child euthanasia directive behind the scenes”; surviving documents “suggest” Asperger “had a hand” in transferring dozens of children to a killing pavilion. On one page, Sheffer states that a transfer to Am Spiegelgrund was a “lethal prescription”; on another, she writes that seven out of nine children the “staff” on “Asperger’s ward” transferred there did not die, although “it is possible that Asperger’s clinic still marked some of them for death.”

None of this is to say that Asperger’s actions during the war were blameless — or even that he was not guilty of crimes against humanity. But a more nuanced approach would have further examined the other, conflicting evidence that Asperger was able to save the lives of some disabled children who had been marked for death. It is this evidence, after all, that was pointed to when Asperger was hailed as a hero.

Even more disconcerting than Sheffer’s approach to Asperger’s wartime actions is her attempt to ground the notion of autism in Asperger’s World War II-era work. Because Asperger relied heavily on notions of Gemüt in his treatise on autistic psychopathy, Sheffer argues that he defined the condition “in terms of Reich rhetoric and values.” Fair enough — but she goes on to claim that today, almost three-quarters of a century later, “his final 1944 description has had a lasting impact. His words live on, shaping the lives and the self-images of millions of individuals.”

Even the most cursory comparison of Asperger’s work, which is peppered with descriptions of “sadistic traits” and children who “delight in malice,” with Wing’s groundbreaking paper reveals that it is her research that has helped shape our modern-day understanding of the autism spectrum. (Asperger’s paper wasn’t even translated into English until 10 years after Wing’s 1981 report — and it was done then only at her behest.) What’s more, “Asperger’s syndrome” is no longer even a recognized diagnosis in the United States: In 2013, it was one of three conditions that were folded into a more expansive diagnosis of “autism spectrum disorder.”

Sheffer is a careful and nuanced researcher, which made her clumsy effort to “destabilize” our notions of autism feel all the more out of place. Then, on the very last page of the book, at the bottom of her acknowledgments, she tells readers that her now-teenage son, to whom the book is dedicated, was diagnosed with autism when he was an infant. “Autism is not real,” she quotes him saying. “It is not a disability or a diagnosis, it is a stereotype for certain individuals…. It made me feel humiliated, and I wanted to put an end to the label of autism.” I was glad to hear his voice: Too often people diagnosed with autism are excluded from discussions about the condition. But I wish Sheffer had trusted her readers enough to let us know about her personal connection to this story at the outset of her book instead of inserting it as a concluding aside, where it became an unsettling coda to her ardent effort to undermine our notions of autism and its origins.