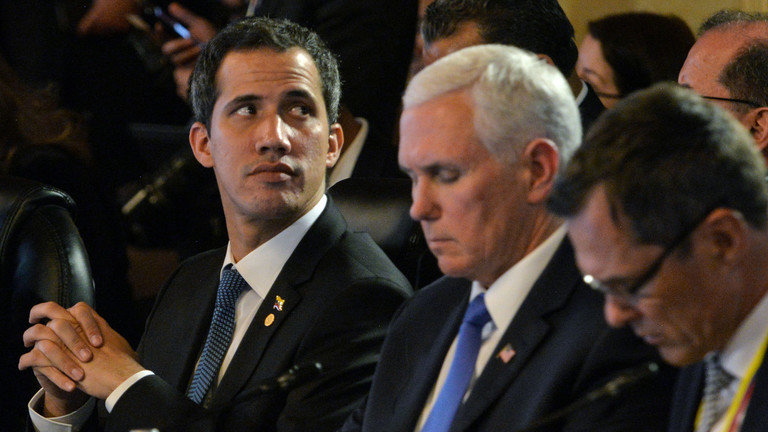 The much-hyped “aid weekend” involving a US Trojan Horse fell at the first hurdle. Venezuelan government forces averted the provocation intended by US aid convoys from Colombia and Brazil.
However, increasing frustration in Washington beckons more false flags.
Something shocking is “needed” in order to jolt world opinion into acquiescing to Washington’s criminal agenda of “all options.” In the fiendish mind of American imperialism, it is also prudent to consider “all options” as meaning more than military aggression. The foulest moves.
The torching of trucks purportedly ferrying US food and medicines across the border from Colombia was patently a planned provocation. Credible video footage and witnesses attested to the arson being carried out by supporters of the US-backed opposition figure Juan Guaido.

The vehicles never even made it to the crossing point where Venezuelan national guards were deployed.
Yet, at the Lima Group summit held – no coincidence – in the Colombian capital, Bogota on Monday, Guaido and US Vice President Mike Pence brazenly spouted lies that the “sadistic” Venezuelan military under President Nicolas Maduro had caused the destruction of vital aid supplies intended for “suffering people.”
It seems obvious the whole scenario of delivering US aid into Venezuela from neighboring countries was really intended as a pretext for military intervention by Washington. The government in Caracas had warned of such a contingency in advance, as had Russia, which is allied to President Maduro’s administration. Moscow’s experience in Syria has no doubt given a lot of valuable insights into the American playbook of using false flags for justifying military aggression.
The timing of the Lima Group summit – 12 Latin American states along with the US and Canada – was meant to capitalize on the false-flag incident over aid, as well as other deadly clashes at the weekend that resulted in dozens of casualties.
However, the provocation did not go to plan, despite Pence and Guaido’s grandstanding assertions.
The other downside for the US regime-change objective in Venezuela is that the Lima Group has for the moment broken ranks over the military option. Pence and Guaido stepped up the rhetoric calling for “all options” on the table – meaning military intervention.

But the Lima Group, including US allies Colombia, Brazil, Argentina and Paraguay, issued a statement after the summit Monday rejecting any military action. They are still functioning as lackeys by calling for a “peaceful transition to democracy” and are in favor of the dubious US-anointed opposition figure Guaido, recognizing him as the “interim president” of Venezuela, in accordance with Washington’s desires.
Nevertheless, repudiation of the military option by Washington’s regional allies will be seen as a damper to the momentum for using American force to overthrow the Maduro government.
Brazil’s Vice President Hamilton Mourão repeatedly said in interviews that his government would not allow a US military incursion into Venezuela from its territory.
The European Union also said it was opposed to any military force being used by the US against Venezuela.
The emerging situation therefore puts the regime-change planners in Washington in a quandary. Their sanctions pressure for blackmailing defections in the Venezuelan political and military leadership has failed. So too has the much-vaunted spectacle of delivering US aid.
Growing frustration on the US side was evident from the obscene posting of “snuff movies” by Florida Senator Marco Rubio, comparing the bloody fate of former Libyan leader Muammar Gaddafi with what might happen to Maduro.
Rubio has become something of an unofficial envoy for regime change in Venezuela on behalf of the Trump administration, in the same way the late Senator John McCain performed his role in helping prompt a coup d’état in Ukraine back in 2014. As well as conveying death threats to Maduro concerning Gaddafi, who was brutally lynched by NATO-backed jihadists in October 2011, Rubio also posted images of former Panamanian leader Manuel Noriega. Noriega was captured by US forces after they bombed and invaded his country in 1989.

The criminality of Rubio and other senior US officials, including President Trump, openly calling for regime change against Maduro is a sign of how manic Washington has become in getting its hands on the country’s vast oil wealth. There isn’t even a hint of coyness about the criminality.
The desperation for regime change in Venezuela by Washington has only become more frenzied as its machinations appear to be coming unstuck.
Therefore, it can be anticipated, Washington needs a game-changing event – badly – in order to shift its lackey Lima Group, the EU and the United Nations to accepting its agenda for a military option.
UN Secretary-General Antonio Guterres has strongly appealed for no violence in the stand-off between the US and Venezuela. Significantly, the UN has declined to get involved in delivering US aid to the South American country, as such involvement would be viewed as taking sides.
Voice of America quotes Dany Bahar, a Venezuela expert at the DC think-tank the Brookings Institution, as saying that the next steps for Washington in its pressure campaign on the “Maduro regime” is “to try to get the United Nations on board, which has not happened yet.”
Ominously, the Lima Group has issued a statement claiming to have credible evidence that Juan Guaido’s life is seriously threatened by Venezuelan state security. Pence also warned that Maduro would be held responsible for Guaido and his family’s safety. Last month, Guaido made claims that his wife’s family was menaced by state agents who allegedly visited their home. It was an unconfirmed claim, which the Venezuelan authorities denied.
Guaido defied a travel ban to attend the summit in Bogota earlier this week. It is not clear if he will return to Venezuela as he is liable to be arrested on charges of inciting sedition and civil unrest.
Indeed, Washington’s game plan does not seem to be going well. Through a series of miscalculations and foolish over-reach, the gambit in Venezuela is at risk of becoming a debacle.

That very situation, however, could tempt a desperate throw of the dice by the Trump administration to salvage its losses so far.
A major, shocking event is needed, it may be calculated, in order to get the Latin American and European lackeys into line on regime-change policy, specifically the military option. As the Brookings Institute pundit said, “to get the United Nations on board.” Because so far, the majority of the UN members, including Russia and China, key UN Security Council veto powers, are not complying with Washington’s dictate of delegitimizing President Maduro and recognizing the US-backed puppet figure Guaido.

What could such a shocking event entail? Somebody is telling the Lima Group that Guaido and his family are in grave danger of being assassinated. Guaido’s Popular Will party is known to engage in violent subversion and allegedly has links to the American CIA, as reported by Abby Martin and others.
As easily as they are lionized, US puppets can be just as easily disposed of. Guaido playing the dirty game of regime change with the most criminal organization in the world – the US government – is a very dangerous game. He’d better watch his back.