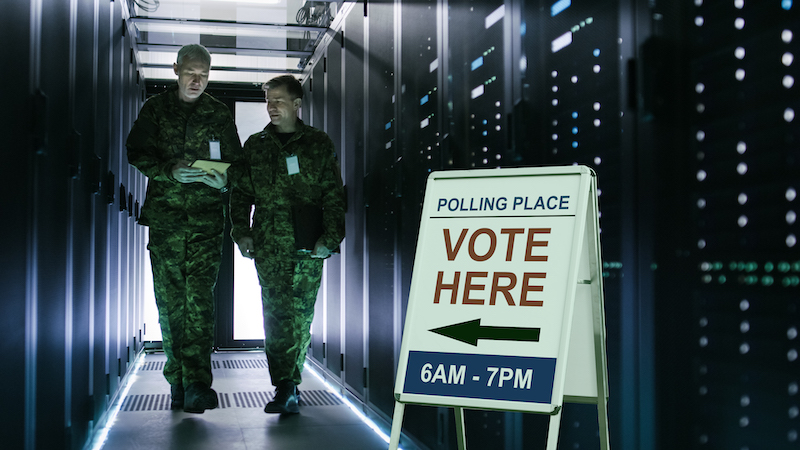 Good news, folks! We have found the answer to the American election system!

Why do we need an answer? Well, our election system is … how do you say … a festering rancid corrupt needlessly complex rigged rotten infected putrid pus-covered diseased dog pile of stinking, dying cockroach-filled rat shit smelling like Mitch McConnell under a vat of pig farts. And that’s a quote from The Lancet medical journal (I think).

But have no fear: The most trustworthy of corporations recently announced it is going to selflessly and patriotically secure our elections. It’s a small company run by vegans and powered by love. It goes by the name “Microsoft.” (You’re forgiven for never having heard of it.)

The recent headlines were grandiose and thrilling:

“Microsoft aims to modernize and secure voting with ElectionGuard.”

Could anything be safer than software christened “ElectionGuard™”?! It has “guard” right there in the name. It’s as strong and trustworthy as the little-known Crotch Guard™—an actual oil meant to be sprayed on one’s junk. I’m unclear as to why one sprays it on one’s junk, but perhaps it’s to secure your erections? (Because they’ve been micro-soft?)

Anyway, Microsoft is foisting its ElectionGuard™ software on us, but worry not that we Americans will be tied down by laborious public debate as to the effectiveness, efficiency and accountability of said software. According to MintPress, “The election technology is already set to be adopted by half of voting machine manufacturers and some state governments for the 2020 general election.” Hardly any public discussion will plague our media or tax our community discourse.

Microsoft describes ElectionGuard™ as “a free open-source software development kit” that “will make voting secure, more accessible, and more efficient anywhere it’s used.” Wow, those are genuinely great words to hear—free and open source. The only words I like more than “open source” are “open bar,” but my dream of an open bar at every polling location remains elusive.

MintPress News’ Whitney Webb recently reported on ElectionGuard™ (and in fact much of the information in this column is coming from her impressive exposé). She spoke to journalist Yasha Levine, who said, “What open source does is give a veneer of openness that leads one to think that thousands of people have vetted the code and flagged any bugs. But, actually very few people have the time and ability to look at this code. So, this idea that open source code is more transparent isn’t really true.”

And as WikiLeaks proved when it revealed the CIA’s Vault 7, whenever the CIA discovers holes in important code, they don’t reveal it to the American people. They keep it to themselves to exploit secretly, which is what could be done with ElectionGuard™, resulting in America’s continued descent into Banana Republic™ (in both senses of the phrase).

I imagine some of you are a bit overwhelmed by such an extensive and confusing list. Feel free to take a mental breather now and rejoin this column in a few minutes. Also, I made up number two.

I do acknowledge that “homomorphic encryption” sounds pretty freaking awesome. “Homomorphic” makes you think there might be a gay member of the X-Men. But in fact, it’s a malleable form of encryption, which apparently is not the most secure nor most sought-after form of encryption according to nerds who study the Crypto-verse (a term I conjured up just now to sound smarter). I won’t get into the details, but the experts seem to agree homomorphic encryption will not turn our elections into an impenetrable wall of democracy, renowned the world over.

On top of that, as Webb stated: “… there is an added layer of concern given Microsoft’s past, particularly their history of working with U.S. government agencies to bypass encryption.”

So, the company setting up the encryption for our elections is a company with a resumé of helping the U.S. government break encryption. This is like setting up a system to test for steroids in baseball and asking Sammy Sosa to help you do it.

Yet, the Microsoft takeover gets even worse because it’s not only Microsoft. They’re doing it in partnership with a cyber security firm called Galois. Whitney Webb again:

“Though it describes itself as “a privately held U.S.-owned and-operated company,” public records indicate that Galois’ only investors are DARPA (the Defense Advanced Research Projects Agency) and the Office of Naval Research, both of which are divisions of the Department of Defense.”

Did you catch that? Galois claims to be a private company, but its only investor is the fucking Pentagon. To rephrase something you already understood in another way so that you get mildly annoyed with me: Microsoft and our war machine are taking over the American election system.

Honestly, who would put election software in the hands of DARPA? DARPA’s the department that tries to put microchips in soldiers’ brains to create Terminators or Robocops or other dystopian hounds of hell. If your first response upon hearing about an invention is, “That’s fucking awful!”—DARPA came up with that.

I wouldn’t even let someone from DARPA look after my cat for the weekend. We all know I’d come home, the cat would have half a head and a Game Boy duct-taped to its ass. “Fuck you, DARPA! I don’t care if the Mario Kart theme song plays when it shits. Get out of my apartment!”

Now, imagine that scenario but replace the cat with our entire election system.

MintPress further revealed Galois has a spin-off company called “Free & Fair” that creates technology for elections and worked with Microsoft to make ElectionGuard™.

Unfortunately, Free & Fair is connected to every form of neocon think tank, government agency and large corporation. They’re especially in bed with the Department of Homeland Security.

As Webb details, “before, during and after the 2016 election, the Department of Homeland Security was caught attempting to hack into state electoral systems in at least three states — Georgia, Indiana, and Idaho — with similar accusations also made by Kentucky and West Virginia. … DHS, which initially denied it, later responded that the attempted breach was ‘legitimate business.’ ”

Plus the fact that Microsoft wants to introduce this software to us for free should set off an alarm bell the size of Lake Michigan. Microsoft doesn’t do anything for free. Microsoft execs don’t say hello to their grandmas for free. Microsoft is one of the most powerful companies in America because of its predatory practices. If the Mafia offered you something for free, would you just say “Thanks!” and wander off? Or would you start appreciating your final days with knees that bend?

In this world free does not mean no ulterior motive. One motive could be to control or rig our entire government. But who would want that? A tiny little country like America? Please. Our country is so inconsequential that we have a third-rate game show host as president.

So right after getting hundreds of millions of dollars from our military, Microsoft partners with Pentagon front companies to develop free software to safeguard our elections. It seems clear the real goal is to hand over our elections systems to the military industrial complex—your friendly neighborhood death machine—and bury the reality of our votes under enough encryption and complex technology that no average citizen really knows what’s happening.

Then, if (read: when) an election is rigged with this technology, we won’t be able to prove it because we don’t have reliable exit polls anymore.

There’s essentially only one remaining exit poll company, Edison Research, and they say outright that they manipulate the exit polls to fit the machine results, which is the opposite of a legitimate exit poll. That’s the same as a math teacher saying, “I give the kids an algebra test, and when I’m comparing their answers to the correct answers, I adjust their answers to better fit the correct ones.” That sounds lovely, but it means you’re going to have idiots getting into MIT on fake math scores. If you do it with elections, you have idiots getting into Congress. Won’t that be a sad day … when Congress is filled with idiots.

Election forensics analyst Jonathan Simon said, “The great irony, and tragedy, here … is that we could easily go the opposite direction and quickly solve all the problems of election security if we got the computers out of the process and were willing to invest the modicum of effort needed for humans to count votes observably in public as they once did.”

Jonathan Simon, god bless him, has used 55 words to say 11: We could easily fix our fraudulent election system, but we won’t.

The answer is not to hand it over to Microsoft and the Pentagon and the ass clowns who make robotic death machines. The Pentagon can’t keep track of $21 TRILLION DOLLARS over the past 20 years—what makes us think they can keep track of hundreds of millions of votes?

The ruling elite have no interest in making sure our voices are heard. They want that as much as they want nunchucks to the balls. If they sought to have our voices heard, we would have paper ballots, ranked choice voting, real exit polls and a president who doesn’t look and act like an over-cooked ham-and-cheese sandwich.