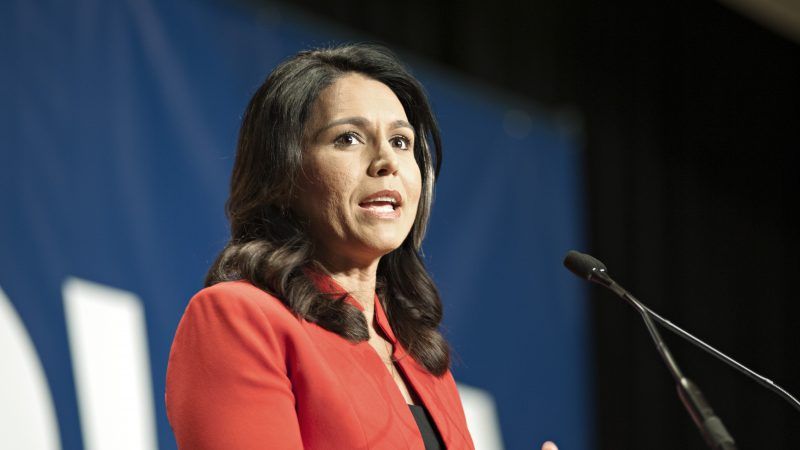 While the rest of the candidates at the first Democratic debate tonight have been doing their best to out-socialist each other, Rep. Tulsi Gabbard has been trying to keep the country out of war.

When asked whether she would rejoin the 2015 Iran nuclear deal—first negotiated by the Obama administration and withdrawn from by President Donald Trump—Gabbard gave an unequivocal yes, while warning about the dire consequences of war.

“War with Iran would be worse than war with Iraq,” said Gabbard, an Iraq War veteran. “Donald Trump and his chickenhawk cabinet—Mike Pompeo, John Bolton, and others—are creating a situation where a spark would light a war with Iran. Trump needs to get back into the Iran deal, swallow his pride, and put America first.”

Gabbard’s position contrasts with the positions of other Democratic candidates on stage. Sen. Cory Booker (D–N.J.) was the lone debate participant to say that he would not automatically re-enter the Iran deal worked out by President Obama, suggesting a better deal could be had.

Sen. Amy Klobuchar (D–Minn.) said that, while she favored reentering the deal, she would like to push for stricter terms. Klobuchar also stressed that if a war with Iran were to occur, it would require congressional authorization.

Gabbard has kept the focus on the U.S.’s aggressive foreign policy the entire night. When asked about what she would do about the gender pay gap, the Hawaii representative declined to answer the moderators’ lady question, instead choosing to denounce our current interventionist foreign policy.

Later in the debate, when Rep. Tim Ryan (D–Ohio) referenced the recent deaths of two U.S. soldiers in Afghanistan as a reason to continue our war in the country, Gabbard was having none of it.

“Will you tell the parents of those two soldiers that were killed in Afghanistan that we have to be engaged? That is unacceptable. We have lost so many lives, we have spent so much money,” said Gabbard.

Drawing critical attention to America’s interminable overseas wars has been the explicit purpose of Gabbard’s longshot campaign from the beginning.

“There is one main issue that is central to the rest, and that is the issue of war and peace,” said Gabbard, when announcing her intention to run to CNN’s Van Jones.

This single-minded focus is unlikely to win her many votes, given the predominance of domestic policy in tonight’s debate, and the Democratic primary as a whole.

That Gabbard was willing to duck a softball, red meat question about raising wages for women to focus on America’s war-making abroad was nonetheless a refreshing moment amidst the otherwise dreary, shockingly left-wing rhetoric from the rest of the Democratic field on stage tonight.