The political extremism of Donald Trump, democratic socialists, and others is a great argument for reducing the size and scope of politics in everyday life. 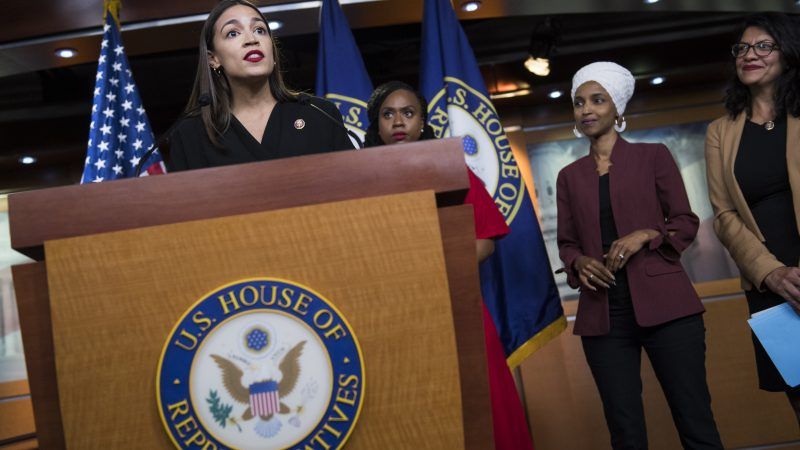 Things are getting uglier by the second in American politics and the sheer awfulness of the current moment perfectly illustrates why I’m libertarian. Do you really want to live in a world where you’re constantly living inside either Donald Trump’s mind or that of Rep. Alexandria Ocasio-Cortez’s (D–N.Y.) democratic socialist “squad”?

Our lives are too short, too fleeting, too important to spend all of our waking hours engaged in the systematic organization of hatreds, which is as good a working definition of politics as there is. There’s ultimately not a lot of wiggle room between Trumpian conservatism, which demands complete reverence for the Donald and includes bolder and bolder threats to stifle free speech along with free trade, and Ocasio-Cortez’s Green New Dealism, which explicitly uses the totalist regimentation of all aspects of American life during World War II as its model. If I wanted to deal with politics all the time, I’d move to a totalitarian country already.

Libertarians are not anarchists but believers in limited government. Certain rights cannot be voted away but we believe that there are areas of life where consensus legitimately rules and that policy should be set by the group rather than the individual. Precisely because politics is a form of force and coercion, though, the parts of our lives governed by consensus should be as small as possible, limited to essential services such as basic infrastructure, law enforcement, safety standards, welfare for the indigent, and some education. The government should treat all people as individuals and all individuals as equal before the law. Over the years, I’ve become less dogmatic about exactly how little or how much the state should do, preferring instead to talk about libertarian as an adjective or a pre-political sensibility, “an outlook that privileges things such as autonomy, open-mindedness, pluralism, tolerance, innovation, and voluntary cooperation over forced participation in as many parts of life as possible.”

Where you and I will draw those lines will likely differ depending on a variety of things and, by all means, let’s have fierce yet civil debates over the scope and efficacy of specific policies and actions. But let’s also avoid the shit show currently on display. Leading the parade of fools is, of course, President Trump, whose recent tweets are not simply racist or in poor taste but deeply un-American.

Where exactly does he get off telling people that if they don’t like everything about the United States, they should leave? That only one of the four Democratic representatives he was originally attacking was actually born in a foreign country underscores his lack of cognitive functioning and the deep-seated nativism of his mindset. Even if you’re born here, he’s saying, you’re not really American unless you look like him.