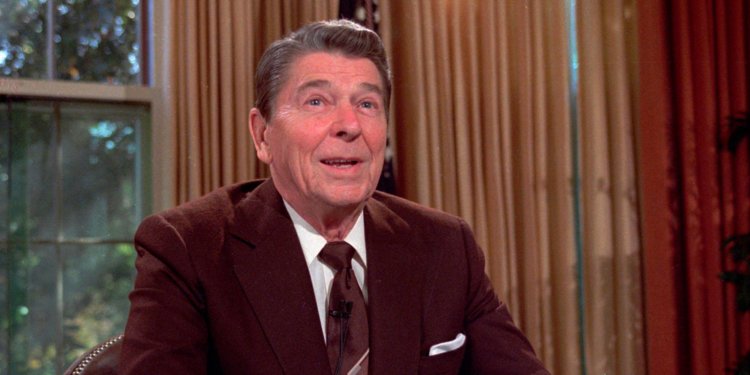 President Ronald Reagan in the Oval Office preparing a speech on tax revision on May 24, 1985. Scott Stewart, file via AP

In 1971, Ronald Reagan, then the governor of California, made racist remarks in a phone conversation with former President Richard Nixon as he denigrated UN delegates who sided against the US in a vote to recognize the People’s Republic of China.

“Last night, I tell you, to watch that thing on television as I did,” Reagan said in newly unearthed tapes published by The Atlantic.

And Reagan went on to say, “To see those, those monkeys from those African countries — damn them, they’re still uncomfortable wearing shoes!”

That comment, which was excised from the tape when it was originally released in 2000, prompted laughter from Nixon.

Reagan was enraged that members of the Tanzanian delegation began dancing in the General Assembly after a vote to seat a delegation from Beijing instead of Taiwan.

Tim Naftali, a clinical associate professor of history at New York University, is behind the release of the exchange, which was recorded by Nixon.

In the article published Tuesday, Naftali, who directed the Nixon Presidential Library from 2007 to 2011, wrote, “When the National Archives originally released the tape of this conversation, in 2000, the racist portion was apparently withheld to protect Reagan’s privacy.”

Naftali said a court order stipulated the Nixon tapes be reviewed chronologically, which was completed in 2013. But in 2017 and 2018 the National Archives began a review of the tapes.

Given that Reagan died in 2004, it eliminated the privacy concerns and Naftali last year asked the National Archives to review the conversations between Reagan and Nixon, which released complete versions of these recordings online earlier this month.

Naftali wrote that the exchange between Reagan and Nixon instilled within the latter a “misplaced” anger at African leaders regarding the UN vote on China.

Nixon ordered his deputy national security adviser, Al Haig, to scrap any future meetings with any African leader of nations that did not side with the US on Taiwan.

In reality, other factors had been at play in the loss for the US, including “maneuvering by the British and French behind the scenes.”

“Had the story stopped there, it would have been bad enough,” Naftali added. “Racist venting is still racist. But what happened next showed the dynamic power of racism when it finds enablers. Nixon used Reagan’s call as an excuse to adapt his language to make the same point to others.”

Reagan’s call had been to urge Nixon to withdraw from the UN, according to Naftali, but Nixon interpreted Reagan’s racist comments about Africans as the “primary purpose.”

In a subsequent conversation with Secretary of State William Rogers, Nixon echoed Reagan’s sentiments in his description of the African delegates: “Reagan called me last night, and I didn’t talk to him until this morning, but he is, of course, outraged. And I found out what outraged him, and I find this is typical of a lot of people: They saw it on television and, he said, ‘These cannibals jumping up and down and all that.’ And apparently it was a pretty grotesque picture.”

The release of this conversation comes as President Donald Trump faces backlash over racist tweets he sent about several congresswomen of color and disparaging comments he made toward Rep. Elijah Cummings and the city of Baltimore. Trump’s rhetoric has prompted a broader conversation about race in the US and the ongoing presence of racism in American society.