The fake news narrative is wearing thin, time to be responsible for your economy you brag so much about 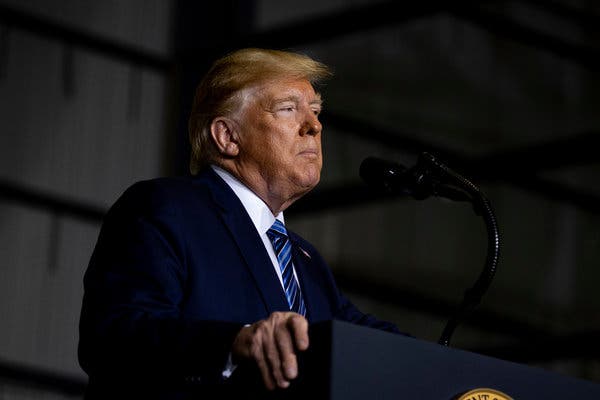 The deficit — the gap between what the government takes in through taxes and other sources of revenue and what it spends — will reach $960 billion for the 2019 fiscal year, which ends Sept. 30. That gap will widen to $1 trillion for the 2020 fiscal year, the Congressional Budget Office said in updated forecasts released on Wednesday.

The updated projections show deficits rising — and damage from Mr. Trump’s tariffs mounting — faster than the office had previously predicted. In May, the budget office said it expected a deficit of $896 billion for 2019 and $892 billion for 2020.

That damage would be even higher if not for lower-than-expected interest rates, which are reducing the amount of money the government has to pay to its borrowers. Still, the 2019 deficit is projected to be 25 percent larger than it was in 2018, and the budget office predicts it will continue to rise every year through 2023.

By 2029, the national debt will reach its highest level as a share of the economy since the immediate aftermath of World War II.

The increasing levels of red ink stem from a steep falloff in federal revenue after Mr. Trump’s 2017 tax cuts, which lowered individual and corporate tax rates, resulting in far fewer tax dollars flowing to the Treasury Department. Tax revenues for 2018 and 2019 have fallen more than $430 billion short of what the budget office predicted they would be in June 2017, before the tax law was approved that December.

The need to borrow more money has been aggravated by several bipartisan budget agreements to raise military and nondefense domestic discretionary spending.

And it could increase if the trade war further chills business investment and consumer spending, resulting in slower economic growth and fewer tax dollars flowing to the Treasury Department.

“One likely reason for the lower-than-expected receipts is that some parts of the economy have been weaker than C.B.O. projected in April 2018,” the budget office said. “A number of developments other than the tax act appear to have contributed to that weakness, including increases in tariffs, greater uncertainty about trade policy and slower economic growth in the rest of the world.”

The ballooning deficit defies a historic trend: Typically, the budget deficit shrinks when unemployment is low. But it is increasing despite the longest economic expansion on record and the lowest jobless rate in 50 years.

It also underscores the degree to which Republicans in Washington — who championed fiscal responsibility under President Barack Obama, a Democrat — have largely abandoned that goal. While lawmakers continue to talk about the need to reduce the deficit, it is no longer the kind of animating issue that ushered the Tea Party into power.

Mr. Trump has shown little inclination to prioritize deficit reduction, and has instead considered policies that would add to the debt. The president has mused in recent days about reducing the taxes that investors pay on capital gains, a move that is estimated to add $100 billion to deficits over the next decade. He has also talked about cutting payroll taxes, which could reduce revenues by $75 billion a year for every percentage point cut in payroll tax rates.

Mr. Trump backed away from both ideas in comments to reporters on Wednesday, though it is unclear if the new deficit figures played any role in that reversal.

The president also wants to make permanent many of the temporary individual tax cuts contained in the 2017 law, which are scheduled to expire in 2025. The budget office forecast assumes those cuts expire and tax revenues rise; if they do not, future deficit projections would be even larger.

Mr. Trump’s indifference to deficits has shattered his campaign promise not only to balance the budget, but also to pay off the entire national debt. And it has left his fellow Republicans, who pushed through deficit-reduction measures under Mr. Obama when the economy was still fragile, in a bind. Congressional Republicans have largely gone along with Mr. Trump’s moves to add more debt, even as they insist they will return to shrinking the deficit if Mr. Trump wins a second term in office.

The deficit has now risen four consecutive years, and is on track to rise for the next four. Such a streak would break the record for longest run of deficit increases in recorded American history — five years, from 1939 to 1943 — according to the Peter G. Peterson Foundation, an organization that advocates deficit reduction.

Congress could vote in the coming weeks to send Mr. Trump additional deficit-increasing legislation, like the permanent repeal of a health care tax known as the Cadillac tax, which has already cleared the Democratic-controlled House. Members of both chambers are preparing for a potentially bruising debate over how to allocate the money needed to fund the government before Oct. 1.

Conservative groups — which largely supported Mr. Trump’s tax cuts — have pushed Congress to cut future deficits by reducing benefits for federal health care and retirement programs, like Medicare and Social Security. “Something must be done soon,” the conservative advocacy group FreedomWorks said in a news release on Wednesday, “and that means taking a hard look at mandatory spending, the root cause of the United States’ fiscal woes.”

Republicans do not believe Mr. Trump is likely to push for cuts to a pair of popular retirement programs — and risk exposing himself to attacks in a re-election campaign — before a second term. But they acknowledged that efforts to curb the projected growth in so-called mandatory federal spending were warranted.

“We’ve got to fix that,” said Senator John Thune of South Dakota, the No. 2 Republican in the Senate. “It’s going to take presidential leadership to do that, and it’s going to take courage by the Congress to make some hard votes. We can’t keep kicking the can down the road.”

“I hope in a second term, he is interested,” Mr. Thune said of Mr. Trump. “With his leadership, I think we could start dealing with that crisis. And it is a crisis.”

Other Republicans say pushing through any changes to safety-net programs will require a compromise that draws in both political parties.

Reducing the costs of Social Security, Medicare and other contributors to the debt is “usually best done during divided government,” said Senator John Barrasso, Republican of Wyoming. “We’ve brought it up with President Trump, who has talked about it being a second-term project.”

Senator David Perdue, Republican of Georgia, said that “it probably takes a second-term president” to prioritize the issue. “It’s politically difficult to say you’re going to save Social Security, because most people think, well that means cutting benefits,” he added.

Other lawmakers in both chambers said that Congress had abandoned all appearance of caring about the national deficit.

“I don’t know, maybe they should be honest with the American people and say that they don’t care about reducing spending,” said Representative Justin Amash of Michigan, a fiscal hawk who recently broke ties with the Republican Party. “There’s no incentive within Congress to keep the debt down. That’s just not something they’re interested in. They believe they can keep spending forever. They never feel they’re going to be held accountable for it.”

Congressional Democrats have walked a line on the deficit, criticizing Republicans for the tax law but providing the bulk of the votes to pass the most recent spending increases, including one that ended the threat of sequestration, the process of sweeping cuts across all government agencies and programs.

“It’s just not financially sustainable at all,” said Senator Jon Tester, Democrat of Montana. “Even though I hated sequestration with a passion, I don’t think that gives you the right to just go out and spend money and put the whole economy on a sugar high. And that’s going on right now.”

Many of the party’s leading candidates for president have proposed large increases in government spending, like Medicare for All, that would need to be financed by tax increases or additional government borrowing. Candidates have proposed rolling back the Trump administration’s tax cuts and imposing new taxes on the wealthy and high earners, while some in the partyhave pushed their leaders to effectively mimic Mr. Trump’s approach to the deficit — spending more without simultaneously raising taxes.

By Jim Tankersley and Emily Cochrane/NYT

Posted By The non-Conformist