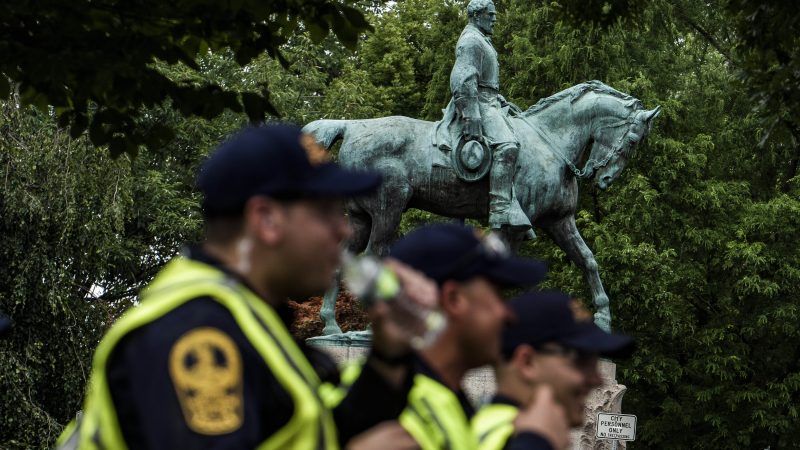 A Charlottesville Circuit Court judge has ruled that the town’s Confederate monuments must remain in place, citing an early 20th century law that allows local governments to erect war memorials but forbids them from taking those same statues down without state permission.

In February 2017, the Charlottesville City Council voted to remove a statue of Confederate General Robert E. Lee, which stands downtown in a park that used to bear his name. In August of that same year, the Unite the Right rally—which saw white supremacists march on the town with tiki torches as they chanted “Jews will not replace us”—was organized in opposition to the statue’s removal, leading to the death of counterprotester Heather Heyer when a white nationalist drove into a crowd of people. The city council then voted to topple a statue of Confederate General Stonewall Jackson, as well.

A group of local residents pushed back at the local legislators’ first vote, filing a lawsuit in March 2017 to keep the town’s shrine to Lee intact. And after the Unite the Right rally—and the council’s second vote—they amended their complaint to include Jackson.

In May, Circuit Judge Richard E. Moore ruled that the much-contested statues are war memorials under state code. He then issued a permanent injunction last week that will prohibit the city from removing either monument. His ruling hinges on that 1904 statute: Although Moore admits that the war memorial law was enacted with racist undertones, he says it has been amended several times and, in its current form, solely centers around historical preservation.

“I don’t think I can infer that a historical preservation statute was intended to be racist,” he said. “Certainly, [racism] was on their minds, but we should not judge the current law by that intent.”

Moore is certainly correct that the law and the proceeding memorials are rife with racism, something that Reason‘s Ron Bailey calls “plain historical fact.” The majority of those monuments were built between 1890 and 1925 during the era of Jim Crow segregation when politicians sought to enshrine reminders that, although the North had prevailed in the literal war, they had not won the ideological one. Charlottesville’s monuments of Lee and Jackson went up in 1924 and 1921, respectively, many decades after the Civil War ended.

But the larger problem here isn’t necessarily the intent of the law but the law itself, which gives local bodies the autonomy to build such war memorials if they so choose. Yet they lose those decision-making powers when it comes to removing the very same statues they have permission to erect—a bizarre example of state overreach.

Plaintiff Jock Yellot, who is head of the Monument Fund, gave tearful testimony. “I’m tearing up because it would just infuriate me that City Council would slander Lee and hide the beauty of those statues under tarps,” he said, referring to protesters who, in the wake of the Unite the Right demonstration, put black shrouds over the Confederate statues. But Yellot might be surprised to find that he has an unexpected opponent in his fight to preserve the controversial monuments.

It would be “wiser…not to keep open the sores of war but to follow the examples of those nations who endeavored to obliterate the marks of civil strife,” wrote Robert E. Lee in 1869, rejecting the idea of putting up memorials for fallen soldiers. It would be better “to commit to oblivion the feelings engendered.”