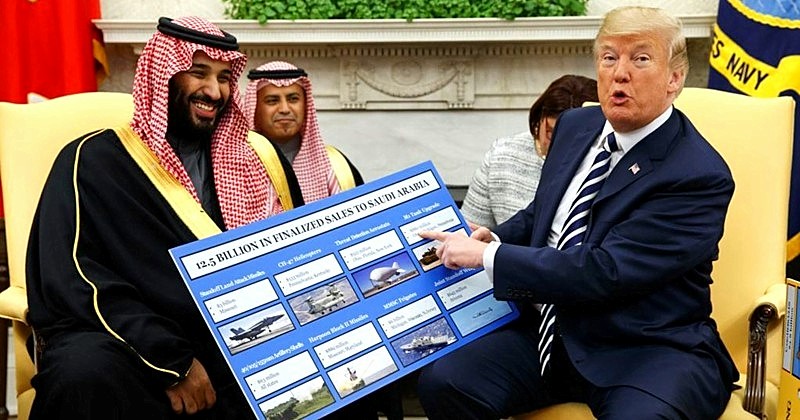 here are as many hot takes on the Trump phenomenon as there are bronzer-addicted blatherati jockeying for airtime on cable news. But there is one take that rarely makes it past the outrage, the sycophancy and the psychobabble that fills all those endless hours of Trump-related “programming.” It’s the fact that President Donald J. Trump is NOT an outlier when it comes to the central organizing principle of American politics over the last 75 years … and that’s oil.

Quite to the contrary, his presidency is an unseemly continuation of oil’s barely-questioned imperium both at home and abroad. It’s an oil-slicked empire that birthed a world-wide network of bases (Hello, Bahrain!), along with a slew of arms sales, deployments, interventions, political coups, deadly proxy wars and, saddest of all, the still unprocessed destruction of a bystander nation under false pretenses. Perhaps most problematically, it also joined the United States’ interdependent oil and defense industries into a sordid alliance with the petrodollar-dealing, terrorism-sponsoring Saudis.

That lucrative, often surreptitious alliance — first forged by FDR, then expanded by Nixon’s deal to “recycle” Saudi petrodollars back into US debt and finally intertwined with US covert power during the war against the Soviets in Afghanistan — has worked for decades to keep key repositories of the world’s fulsome oil supply in the ground and, therefore, off the market. From Iraq to Iran, from Libya to Central Asia and beyond, it’s been a profitable practice that can modulate the price of oil by restricting supply, by scuttling transmission routes and by magnifying or artificially creating geopolitical “instability” to manipulate the market’s fragile “psychology.”

Simply stated, the more market access there is to oil from uncooperative, reserve-rich nations like Iran or, say, from Venezuela (home to the world’s largest proven reserves), the more it dilutes the ability of the American-backed Saudis to use their domination of OPEC to control the global oil market. For instance, with Iran’s oil largely off the market (along with Venezuela’s Trump-sanctioned oil and the Saudi-financed mess that is Libya’s embattled oil landscape) the Saudis can leverage their lagging share of the world’s proven reserves to modulate the price through output cuts … cuts that the Saudi-led OPEC oil cartel is newly coordinating with a powerful non-member, President Vladimir Putin’s Russia.

Therein lies the key difference with the latest version of the Great American Oil Presidency … it’s that the Saudis — thanks primarily to Jared Kushner’s WhatsApp bro Mohammed bin Salman (MBS) and to the oft-overlooked influence of the UAE’s Sheikh Mohammed bin Zayed (MBZ) — brought Russian President Putin in as a not-so-silent partner in their Trumped-up effort to manipulate and to maintain control over the oil market. And it’s more of a natural fit than you might think. In fact, the UAE’s MBZ-led sovereign investment fund (the Mubadala Development Company) has “invested alongside” the Kremlin’s sovereign investment fund (the Russian Direct Investment Fund) “since as early as 2013,” according to Aljazeera.

This surprisingly close relationship was finally cemented on June 1, 2018, when the UAE and Russia announced their “strategic partnership,” one built on “the rich and fruitful experience of bilateral cooperation,” according to the lengthy English language version of the declaration published by the Kremlin. The UAE has, in turn, been cooperative in Russia’s efforts to preserve Bashar al-Assad’s regime in Syria. The UAE has also become Russia’s biggest arms buyer in the region. And Russia has even pledged to host the UAE’s first ever astronaut on a Soyuz rocket ride to the International Space Station.

Meanwhile, back on Earth (or Htrae) … President Trump desperately wants to unplug US funding for climate monitoring satellites. Perhaps that’s because the data forecasts a troubling time ahead for hydrocarbons. It’s troubling, that is, if you happen to rely on oil and gas revenues like the US oil industry. It’s even more problematic if you run petro-states like Saudi Arabia, Russia and the UAE. Their hydrocarbon-dependent economies all face the synergistic specter of rapidly-emergent, cost-competitive renewables intersecting catastrophically (for them) with a growing sense of dread about ever-more-evident climate change. That synergy could create a tipping point of no return for oil … particularly among previously unconvinced, gas-guzzling American consumers.

Basically, a viable motive for and the potential means of oil’s murder are now palpable things. Peak oil is old news, folks. Instead, the looming problem is peak demand. OPEC oil powers are already planning for it … or were planning for it before deciding to actively deny it is even a thing. Self-serving public denials aside, the world is awash in oil … as Saudi maneuvering repeatedly shows. Not coincidentally, the stark realization they’re facing a prolonged supply glut comes at the same time renewables are finally emerging from an interminably long “proof of concept” phase.

To wit, Scotland is getting the “equivalent of 74.6%” of its electricity from renewables. Renewables are now Germany’s main energy source (40% of its electricity). China is leading the world in solar and wind capacity. Eighty percent of the new energy feeding Texas comes from wind and solar. And, despite Trump’s best efforts, the US has reached a “coal cost crossover” point where electricity generated by wind and solar is cheaper than 74 percent of existing US coal-fired power capacity. Now that’s almost literally a canary in the coal mine … one that major oil producers could also face sooner rather than later if US public opinion continues to be moved by the real-world consequences of anthropogenic climate change.

Even more ominously, energy-hungry US economic growth is showing weakness as a reliable driver of future oil profits. An analysis by Lawrence Livermore National Lab found that the US used more energy than ever in 2018, but the biggest growth was in solar use (up 22 percent) … with wind use (up 7.6 percent), natural gas use (up 10.7 percent) and even biomass use (up 5 percent) all out-pacing good old-fashioned petroleum (up 2 percent).

Previously, the way to counter renewables was to simply open up the spigot and drown out the nascent competition. But opening up the spigot drives up supply, drives down the price and drives down your share of the world’s proven reserves. That “percentage of proven reserves” issue is particularly nettlesome when your competitors’ supplies are being kept in the ground due to sanctions or armed conflict (see Iran & Libya). Even more daunting (for oil producers), it looks like renewables are decoupling from oil and that makes them increasingly immune to the vicissitudes of timely “instability” … or even to direct market manipulation. As a Seeking Alpha analysis pointed out: