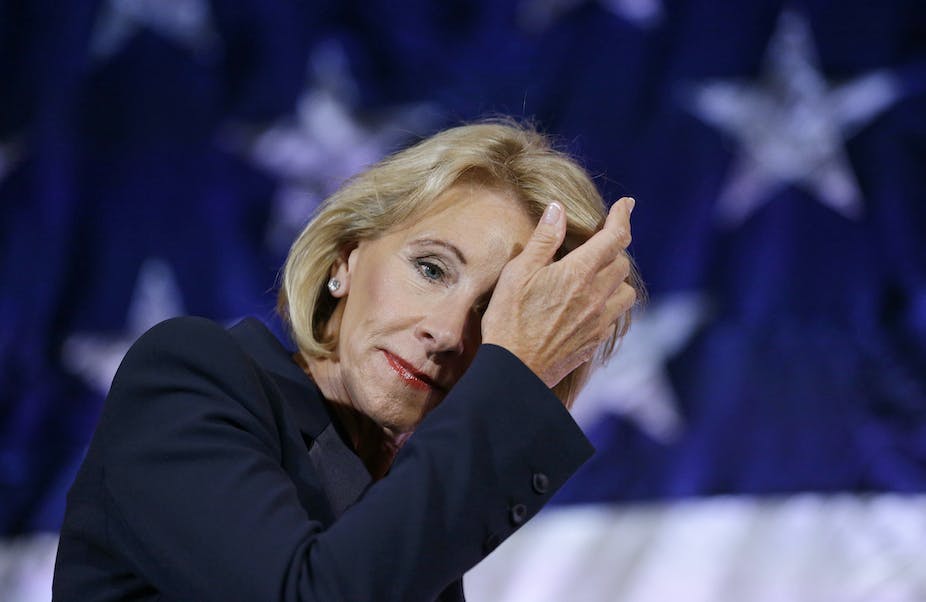 When U.S Secretary of Education Betsy DeVos discussed the results from the 2019 National Assessment of Educational Progress, she described them as “devastating” and part of a worsening crisis in education.

The results showed a slight decline in reading scores and a flattening in math scores.

She noted that two out of three of the nation’s children aren’t proficient in reading. She also decried as ineffective the US$1 trillion in federal spending on education over the past 40 years, saying it has done nothing to stop the widening gap between the highest- and lowest-performing students.

“We cannot abide these poor results any longer,” DeVos stated. “We can neither excuse them away nor simply throw more money at the problem.”

As an education scholar, here are several issues that I see with DeVos’ take on the state of American education.

DeVos’ comments are part of a long-running critique of American primary and secondary school education.

“This country is in a student achievement crisis, and over the past decade it has continued to worsen, especially for our most vulnerable students,” DeVos stated.

In this, the education secretary follows a long line of critics – from former Secretaries of Education William J. Bennett and Margaret Spellings to author George H. Smith – who see American schooling as a shambles, dating back to the famous 1983 “A Nation at Risk” report, which criticized mediocre academic performance as being akin to an “act of war.”

DeVos uses the “student achievement crisis” turned up by the latest national test scores to urge support for alternatives to public K-12 education. For instance, when she spoke about “expanding education freedom,” she is alluding to greater support for voucher systems and charter schools as alternatives to, and in competition with, public primary and secondary schools. This is a stance she has taken throughout her time in the Trump administration.

It’s important to note that DeVos does not call for reforming public schools or increasing support to teachers or students, either of which could potentially boost future test results.

3. DeVos is pushing a free market approach to education reform

Reducing the federal government’s role and increasing privatization is the essence of the DeVos approach to education. Her approach is based on a free market philosophy that focuses on private good rather than public benefit. For example, she believes personal benefits – not social benefits – will follow what she describes as the administration’s “transformational plan to help America’s forgotten students escape failing schools.” This approach sees personal material gains in the form of compensation and skills-building as more important than cultural change or broader social good.

DeVos sees vouchers and charter schools as the means of escape from failing schools, saying, “students can break out of the one-size-fits all system and learn in the ways that will unlock their full potential.”

DeVos offers just a hint of recognition of inequity in her remarks, such as when she decries the school experience of “our most vulnerable students.” Yet, there is no clarity on what – be it race, class, geography or gender – defines or makes these students vulnerable. Nor does DeVos call for directing resources these students’ way.

5. DeVos is silent on educational technology

Despite how deeply K-12 schools have invested in educational technology to improve education, DeVos makes no mention of adapative learning, multimedia materials, rich media classrooms or students learning to code. She doesn’t call for technological fixes to improve student outcomes, nor criticize badly implemented tech as a cause of unfortunate scores.