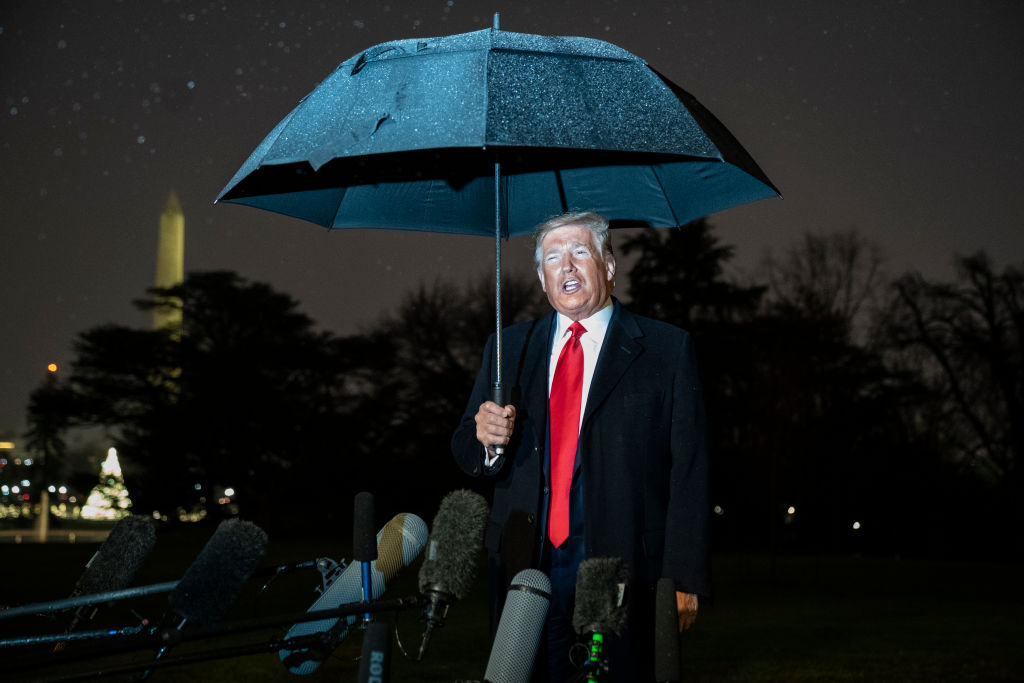 US president Donald Trump holds an umbrella as he speaks to journalists before boarding Marine One on the South Lawn of the White House on December 10, 2019 in Washington, DC. Drew Angerer / Getty

Getting rid of Trump would be great, but Congress isn’t going to do it — we actually have to vote him out. And impeachment, a therapeutic ritual for MSNBC hosts and an act of score-settling by the national security state, isn’t helping.

When you express skepticism about impeaching Donald Trump to some comrades on the Left, there’s a reflexive, almost formulaic, reaction. You don’t understand how terrible he is, and how great the urgency of booting him is. The man is a walking insult to our Constitution! Sure, the articles of impeachment may not cover his worst crimes, but hey, we can turn it all to our advantage. Max Sawicky deftly assembles all of this in the first hundred words of his polemic.

Leaving aside the Constitution, because it’s part of the problem — Trump wouldn’t be president were it not for that near-unalterable relic of slavery days, the Electoral College — one can concede some of this. Yes, Trump is awful, and it would be a blessing to be rid of him. He’s a bigot, a grifter, and a would-be authoritarian. But impeaching him less than a year before the election is not the answer to much of anything. It’s a distraction from ejecting him in the most definitive way possible: beating him decisively in an election.

It’s telling that Joe Biden is named in the articles of impeachment. For the Democratic leadership, Trump’s worst offenses — the caging of children, the apologetics for Nazis, the fealty to asset-strippers and plutocrats, the endless vulgarities — were unpleasant but not fatal. Despite all those offenses, they didn’t begrudge him an extension of the Patriot Act, which is a funny set of powers to grant to someone so awful. What really set Nancy Pelosi et al. off was the alleged conspiring against one of their own, as reported by CIA officer Eric Ciaramella, someone who worked closely with the Obama administration. Dems want to keep Ciaramella’s name out of it, but isn’t knowing one’s accuser a cornerstone of American law?

Aside from the offense against Biden, Trump has serially disrespected not only the CIA but also NATO, much to the distress of national security tools like Adam Schiff. These are the least of Trump’s offenses, but they’re what really move the party leadership. Max thinks we can hijack the process for our own purposes, whatever those might be, but to Nancy Pelosi, that would doubtless be just another “green dream or whatever.”

I’ve never understood the point of impeachment from the first, even when it was a cause being pushed by the Squad, whom I otherwise admire a lot. Whatever its origins, Pelosi, a highly skilled politician in the short-term tactical sense, turned it into a defense of the old order. There’s no chance the Senate will convict Trump, as Mitch McConnell has made clear. So the House passing this narrow, legalistic indictment looks more like performance, and a weak one at that, than politics. It’s about taking a stand, making a gesture, and not changing the world.

What is the endgame for impeachment? Max swears they’re not looking for “a restoration of the Obama-Clinton order, much less the elevation of President Michael Pence.” But should Trump be convicted and removed from office, as fanciful as that seems, the result would be the elevation of Pence. As for the restoration angle, there’s a species of mainstream Democrat who seems to think that everything was pretty much okay in the United States before January 20, 2017, and if we just get back to the status quo ante we’ll be well on the road to recovery. That’s Biden’s main selling point, and a core belief of the Democratic establishment.

While impeachment seems like another iteration of the desire to exorcise Trump, the impeaching mindset obsesses over his offenses with a dark, almost pornographic, enjoyment. As Jodi Dean has said, liberals are in love with their hatred of Trump. Functionaries and spies catalog his crimes, stoking outrage among connoisseurs. Liberals stage readings of reports written by cops and prosecutors. Russian hands are always present. “All roads lead to Putin,” Nancy Pelosi said in October and again a weekago, as if the United States had never produced an authoritarian, xenophobic huckster before. You have to wonder if the near-certain failure of impeachment is part of its charm. It gives them the best of both worlds: a chance to indulge their hatred at a higher level of intensity without removing him from the scene, allowing their festering obsession to endure.

What Max thinks is a compelling argument in his favor reads more like one against him: “A comment I’ve heard disparages impeachment as little more than ‘drama.’ Whether we like it or not, there are more people paying attention to this drama than chewing over the differences between Medicare for All and Medicare for Lots More Folks. Drama is interesting! That’s why it’s called drama.” He’s making my point for me: the drama is a diversion from actual politics that matter. And yet, for drama, impeachment is getting rather poor ratings. For those of us old enough to remember the Watergate hearings, this remake is of decidedly lower entertainment value.

For all their Trump hatred, Dems are handing him a few victories. As a headline in the print edition of the December 14 Wall Street Journal put it: “Trump’s Impeachment Rebuke Bookended by Policy Successes.” Among those successes, the creation of the Space Force, an insane idea, and the imminent passage of NAFTA 2.0 (though the Mexicans may yet scupper the deal). It’s tempting to suspect the Dem mainstream’s embrace of impeachment was a confession that they don’t have an agenda or a face to put away Trump in November and they know it. Well, there’s Bernie, but he doesn’t count for them.

Since Max has confirmed this is all showbiz, what is the sequel to The Impeachment Show? Ralph Waldo Emerson had a point when he advised, “When you strike at a king you must kill him.” It’s not implausible that Trump could get impeached, exonerated by the Senate, and reelected — and maybe even impeached again. He could emerge from this lunacy politically strengthened.

Impeachment doesn’t strike at the sources of right-wing power, from the Koch network and private equity to the think-tank and propaganda machine and the neo-Nazi underside. It papers over but hardly heals the internal rifts in the Democratic Party. It’s a profound waste of time and energy.