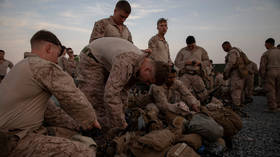 US Marines prepare to deploy to Baghdad to protect embassy © Reuters / US Marine Corps
US Defense Secretary Mark Esper has warned that he will take “preemptive action” to “protect US forces” if he receives word of attacks by Iran or its “proxy forces,” claiming to have indications of such attacks in the future.

Esper said he expects more “provocative behavior” by “Iran-backed” groups – and warned that “they will likely regret it.”

“They’ve been…attacking our bases for months now,” Esper claimed, apparently pinning every rocket attack on a coalition base in recent months on Iran. He called on Iraq to “do more…to address these Iran-sponsored militia groups and to stop their attacks on US and coalition forces,” complaining the US has not “seen sufficient action on that front” from Baghdad.

The Trump administration blamed Tuesday’s siege of the US embassy in Baghdad on Tehran and sent 750 troops to Iraq in order to beef up security at the diplomatic compound. Iran, President Donald Trump has said, will be held “fully responsible for lives lost, or damage incurred, at any of our facilities.”

However, the protesters who surrounded the embassy were motivated by rage over US strikes that killed 25 members of Kataib Hezbollah, part of Iraq’s Popular Mobilization Units (PMU) and officially part of the Iraqi military.

Tehran, meanwhile, has accused the US of punishing it for defeating Islamic State (IS, formerly ISIS/ISIL) terrorists. It slammed the “audacity” of Washington fobbing responsibility for the protests off on Iran when US airstrikes – supposedly in response for an attack on a coalition base near Kirkuk – had actually motivated the embassy-storming.

The US could send still more forces to the Middle East, Esper said, pledging to “take it day by day.”“A variety of forces” are standing by in case they are needed, Joint Staff General Mark Milley said. The US has some 60,000 troops in the region already.