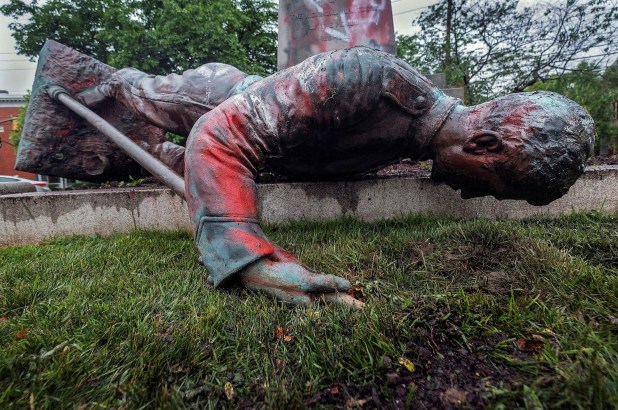 A statue from the Richmond Howitzers Monument, erected in 1892 to commemorate a Confederate artillery unit, lies after being toppled by protesters in Richmond, Virginia.REUTERS

In the wave of cancellations sweeping America, Confederate statues have been particularly hard hit.

They have been graffitied, assaulted, torn down; authorities rush to remove them.

For his part, President Trump has been a steadfast defender of the statues and other memorials to the Confederacy. He has come out in favor of preserving the names of military bases honoring Confederate generals, and he has pointedly said that we should build on our heritage rather than tear it down.

They fear where the slippery slope of woke iconoclasm will lead — first it’s Jefferson Davis, ultimately George Washington. They value tradition and worry we are trashing part of our history.

This impulse, though, is a mistake. Confederate statues and symbols deserve to be re-evaluated — and often mothballed.

The statues are an unnecessary affront to black citizens, who shouldn’t have to see defenders of chattel slavery put on a pedestal, literally.

It is impossible to evaluate these monuments without considering the context of why they were created. Many of them were erected as part of the push to enshrine a dishonest, prettied-up version of the Confederacy.

Finally, learning about, say, Robert E. Lee doesn’t require staring up at a 60-foot-tall statue of him on a major Richmond, Va., thoroughfare.

We should make distinctions, of course. Big statues in prominent public spaces erected to make a point about the supposed glories of the Confederacy should be transferred elsewhere (ideally to museums or battlefields). But this should be done lawfully, not via mob action.

The Confederate flag should be shunned, as a symbol of a ­viciously flawed cause.

Direct commemorations of the Confederate war dead — obelisks with lists of names, Confederate cemeteries — should be preserved to mark the human cost of a terrible conflict.

The bases are a harder case, since their names have themselves entered the American military tradition. But as the source of those names becomes more widely known, it’s going to be harder to ask African-American soldiers willing to sacrifice life and limb for their country to look past them.

The Richmond statue of Lee, which Virginia Gov. Ralph Northam has said is coming down, has long been a point of contention. Its 1890 unveiling was a key moment in the creation of a cult of Lee, as a man of “moral strength and moral beauty,” as a speaker put it that day.

Frederick Douglass appropriately scorned this movement. “It would seem,” he wrote sarcastically, “that the soldier who kills the most men in battle, even in a bad cause, is the greatest Christian and entitled to the highest place in heaven.”

The apotheosis of Lee was an ­element of a Lost Cause mythology that maintained that the Civil War wasn’t truly about slavery, only Southern states defending their legitimate prerogatives.

Alexander Stephens, the vice president of the Confederacy, would have scoffed at this. In his notorious Cornerstone speech in 1861, he said the new government was built on “the great truth” of slavery.

The theory of state rights that the Confederacy used to justify secession wasn’t meant to preserve our constitutional scheme but to demolish it. The idea had been developed by South Carolina’s John C. Calhoun, who ­believed the country had set off on an erroneous, nationalist path from the very beginning.

Besides, the South supported state rights only to the extent that they were useful in protecting slavery. It insisted, after all, on a federal Fugitive Slave Act.

Secession was a traitorous act that threatened to destroy the American nation, to create a rump republic built on slavery and to make impossible the subsequent rise of the United States to a world power. Its leaders don’t deserve to be given a place of honor in our landscape denied to worthier men. Confederate statues shouldn’t be vandalized — but they should go.