You wouldn’t think a company that just told Wall Street it will deliver over 800 jetliners this year would assign top priority to winning a Navy program aimed at buying a mere 76 unmanned aircraft, but that’s what Boeing has done. The world’s biggest aerospace company has decided the carrier-based MQ-25 drone is the beginning of a revolution in naval aviation, and it is determined to be on board.

MQ-25, popularly known as the Stingray, is the latest in a series of Navy efforts aimed at investigating how unmanned aircraft might be integrated into the air wings that fly off of its supercarriers. Large-deck aircraft carriers are the signature combat system of the joint force, and the Navy has been experimenting for two decades with ways in which drones might make its aviation arm more lethal, survivable and versatile. Now it thinks it has the answer: an aerial refueling drone that can extend the reach of carrier-based aircraft by hundreds of miles.

The basic idea is that MQ-25, carrying 15,000 pounds of fuel, would rendezvous with carrier-based fighters and jamming aircraft at the outer edge of their combat radius, giving them the legs to fly much further — maybe up to a thousand nautical miles from the carrier. This has major operational benefits. First, it enables the carrier to stay far away from hostile forces. Second, it frees up fighters currently used for aerial refueling to do other combat missions. Third, it provides a long-endurance drone that can also be used for collecting reconnaissance. 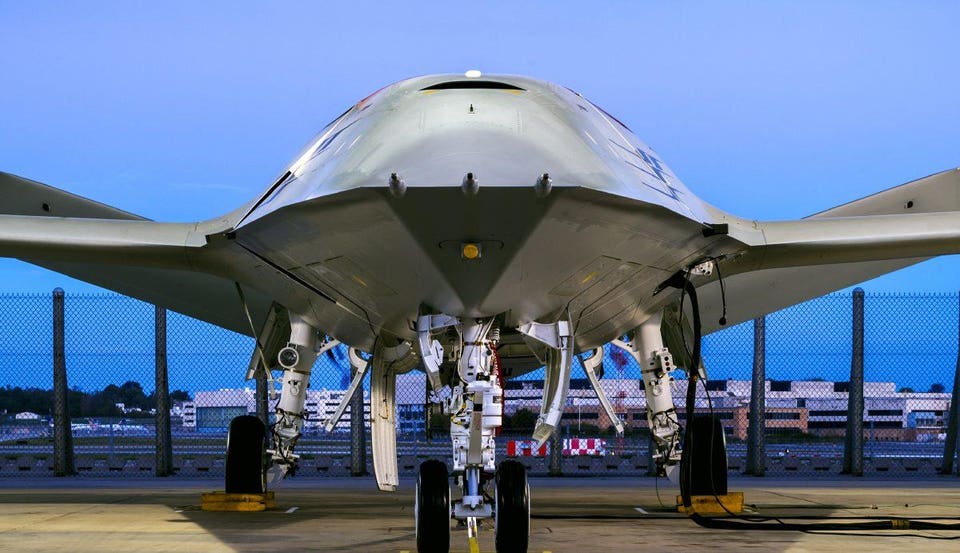 Boeing released this head-on view of its proposed MQ-25 drone design in December.

And perhaps most importantly, MQ-25 will enable the Navy to get comfortable with operating both manned and unmanned aircraft off the same deck. That is probably what intrigues Boeing, a contributor to my think tank, the most. The way Boeing sees it, using drones for tanking is just one facet of an impending sea change in naval aviation. Once the Navy gets comfortable with drones on flight decks, there are plenty of missions besides tanking to which unmanned technology might be applied.

The Navy tacitly acknowledged this when it selected the designation MQ, because “M” in military nomenclature means multimission (“Q” means unmanned). Having already experimented with drones as penetrating strike systems, counter-terror weapons and airborne intelligence collectors, the Navy has a good grasp of all the things a drone might do if it can fly off of an aircraft carrier. Aerial refueling just happens to be the most pressing mission. But that’s the mission where Boeing’s entry in the competition must prove itself.

It helps that Boeing has more experience than any other company in the world with aerial refueling, however it also has more experience than any competitor with naval aviation. The company has been selling planes to the Navy for nearly 90 years, and one of its heritage enterprises — McDonnell Douglas — built the first jet-powered aircraft to land on a carrier at sea. All of the strike fighters and jamming aircraft that fly off carrier decks today were manufactured by Boeing. Boeing very much wants to preserve its lead it in that business.

In order to do that, it has to build the first carrier-based drone that has ever entered serial production. Beyond the revolution in warfighting that this might ultimately portend, though, the company sees a second transformation in progress: the Naval Air Systems Command — NAVAIR — is reorganizing to deliver new technology to warfighters faster. Having long been locked in cutthroat competition with Airbus for dominance of the commercial transport market, Boeing thinks it has learned some lessons about how to bring disruptive technology to market quickly.

The Boeing proposal for MQ-25 leverages past work on sea-based drones and the company’s own internal investments to offer a fast path to initial operating capability, but at relatively low cost and with minimal risk. The main focus of the proposal is on satisfying the requirements of the tanking mission while demonstrating carrier suitability, but as per the Navy’s solicitation, the Boeing aircraft will include infrared and optical sensors plus provisions for a search radar. Competing entries from Lockheed Martin and General Atomics will presumably do the same.

Boeing has been reserved in discussing the features of its offering, but based on what is publicly known, naval expert Tyler Rogoway observed last month that the company is offering a “medium-altitude, medium-endurance unmanned platform which could be adapted to perform a whole series of roles beyond that of an aerial tanker.” The on-board reconnaissance capabilities of the drone will significantly enhance the situational awareness of carrier strike groups, and the large internal volume of the airframe could be readily adapted to diverse payloads.

However, the Navy has good reason for emphasizing the tanking mission. Roughly a quarter of its strike fighters are currently tied up providing aerial refueling to other fighters in the carrier air wing, and having a drone that can take over that mission would make the entire wing more lethal. MQ-25’s refueling capability will also be available to carrier-based Hawkeye radar planes, and to the stealthy F-35C fighter when it joins the fleet. The range and endurance improvement this will deliver to the carrier air wing will help address rising threats, particularly in the Western Pacific.

For Boeing, though, the MQ-25 has a larger meaning. It potentially offers a pathway to the future of naval warfare at a time when production of the company’s carrier-based Super Hornets is gradually being eclipsed by the F-35C. Like the Air Force’s TX trainer, MQ-25 is an opportunity to continue building smaller military aircraft until the next generation of strike fighters materializes. Because Boeing tries to balance its business between commercial and military markets, the company is determined to do what it must to win the competition for the first unmanned aircraft to join the Navy’s carrier air wings.