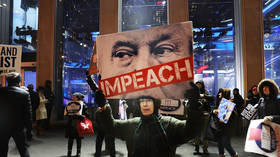 © Spencer Platt / Getty Images North America / AFP
US President Donald Trump responded to the Democrats-led impeachment inquiry by posting an ominous quote from a church leader who warned that removing him from office would inflict “Civil War-like” wounds on the nation.

Known for regularly watching shows on Fox News, Trump apparently liked how the Southern Baptist minister and televangelist Robert Jeffress appeared on the channel on Sunday and blasted the Democrats for wanting to impeach him.

“And I do want to make this prediction this morning: If the Democrats are successful in removing the president from office, I’m afraid it will cause a Civil War-like fracture in this nation from which this country will never heal,” Jeffress said live on air.

Trump then took the quote and posted it on Twitter. He edited Jeffrees’ words a little bit, adding in parenthesis that the Democrats “will never” succeed in impeaching him should they try to do so.

….Election, and negate the votes of millions of Evangelicals in the process. They know the only Impeachable offense that President Trump has committed was beating Hillary Clinton in 2016. That’s the unpardonable sin for which the Democrats will never forgive him…..

….If the Democrats are successful in removing the President from office (which they will never be), it will cause a Civil War like fracture in this Nation from which our Country will never heal.” Pastor Robert Jeffress, @FoxNews

The president posted a few other excerpts from the minister’s comments, including one in which he said that by fighting to oust Trump, the Democrats “don’t care if they burn down and destroy this nation in the process.”Various Democrats have been calling to impeach Trump for different reasons ever since he took office more than two years ago. The first real step to do so, however, was made when House Speaker Nancy Pelosi formally launched an impeachment inquiry last week.

The Democrats are now accusing Trump of pressuring Ukrainian leader Volodymyr Zelensky to investigate the dealings of former US Vice President Joe Biden, who is aiming to be Trump’s opponent in the 2020 presidential race. The president has denied any wrongdoing, dismissing the allegations as “witch hunt garbage.”