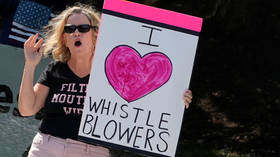 A protester outside Trump National Golf Club in Sterling, Virginia, September 21, 2019. ©  REUTERS/Yuri Gripas
MoveOn, a major advocacy group fine-tuned to the needs of Democratic Party, has finally found a whistleblower it can support – the CIA agent whose complaint triggered an impeachment inquiry against US President Donald Trump.

MoveOn, which describes itself as the largest independent progressive advocacy group in the US, hailed the still-anonymous whistleblower for taking on “great personal risk to defend our democracy” by revealing Trump’s call with Ukraine that this person only knew of second-hand.

The organization, sponsored by many Democratic donors including billionaire George Soros, implored its millions of members to “have the whistleblower’s back” with donations and petition signatures. MoveOn has even partnered with Whistleblower Aid – a group that steadfastly opposes the release of classified information, equating such leaks with criminality – and thus foisted a warped definition of whistleblowing on its massive audience, one which permits only “safe” disclosures unlikely to ruffle establishment feathers.

MoveOn’s decision to support the Trump whistleblower is what one might expect from a progressive organization as determined as any to push the president out the door. But MoveOn has conspicuously avoided supporting national security whistleblowers in the past, including individuals who paid dearly for coming forward. Its sudden change of heart reeks of ulterior motives to those who have advocated for those whistleblowers for years.

A pro-whistleblower organization might be expected to put out petitions in support of military intelligence analyst Chelsea Manning, who is back in jail over refusing to testify against Wikileaks founder Julian Assange – despite having her sentence commuted by President Barack Obama – or raise money to support former CIA agents John Kiriakou and James Sterling, who both spent time in prison for blowing the whistle.
In fact, journalist and activist Norman Solomon had actually suggested to MoveOn that they take up Sterling’s case in December 2015, after the whistleblower was sentenced to prison, only to be brushed off. The group had “definitely done a lot of testing on [NSA whistleblower Edward] Snowden and Manning in the past, but unfortunately nothing quite reached the level of member support where we were able to send it out,” read the letter he received from the organization. Have they changed their mind, or merely decided that the CIA whistleblower – embraced by the media establishment, the Democrats, and the grassroots #Resistance for the potential to bring down Trump – is the only one worth supporting?

Not only is the current “whistleblower” a politically popular cause, but there are hints of high-level collusion in this case. The rules for intelligence community whistleblowers were quietly changed to allow the inclusion of secondhand knowledge of wrongdoing, not long before the complaint was filed about Trump’s call with Ukrainian President Volodymyr Zelensky – a call the so-far-anonymous intelligence official did not personally witness.
MoveOn’s sudden change of heart sends a message to actual whistleblowers: if you don’t have friends in high places, the “progressive” community wants nothing to do with you.

Ironically, MoveOn was created with a completely different purpose more than two decades ago. Its founders drafted a petition, subsequently signed by hundreds of thousands of Americans, calling for the country to “move on” from the efforts to impeach President Bill Clinton in 1998, which Democrats painted as a “vast right-wing conspiracy.”