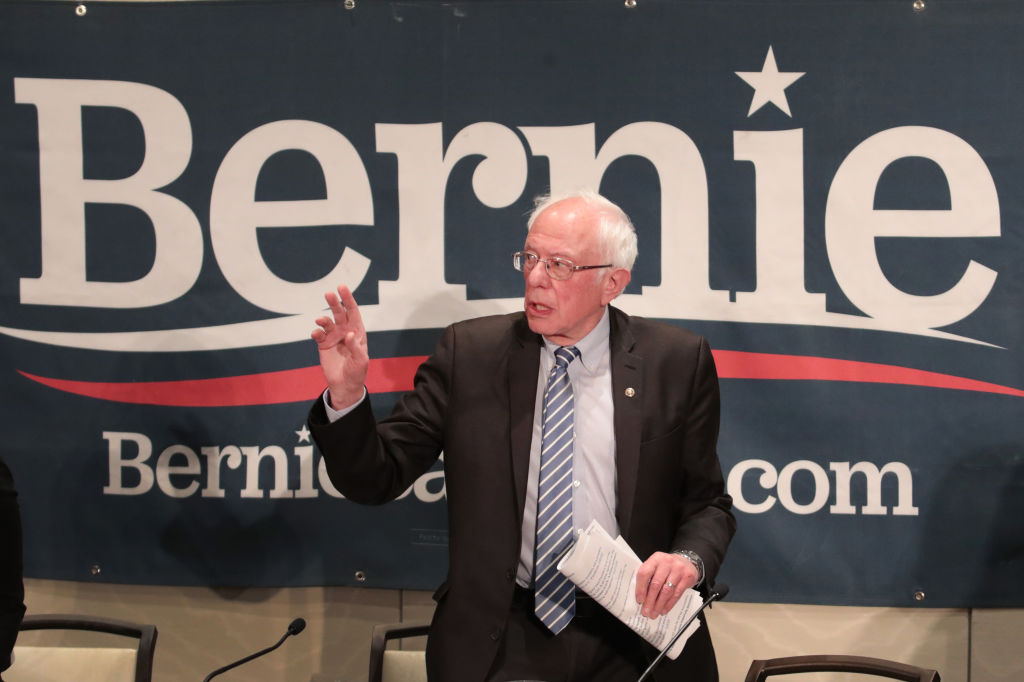 The results are in, and as predicted the votes last night broke in favor of Joe Biden, who at the time of this writing has extended his lead over Bernie Sanders by 160 delegates.

Also as predicted, the center-left punditry began without hesitation to declare that Sanders must exit the race, despite the fact that only 1,486 of 3,979 pledged delegates had been allocated, leaving 2,493 up for grabs. Biden has only acquired one-third of the magic win number, and Sanders is still nipping at his heels. The writing is not on the wall yet, but plenty of Sanders critics are eager to read it aloud anyway.

Don’t humor them. Nearly every one of the pundits interpreting last night’s results as incontrovertible proof that Sanders is non-viable has been trying to discourage his supporters all along — even in instances of victory, for example when they bent over backward to discount his popular-vote win in Iowa and downplayed his triumph in New Hampshire.

There’s no use sugarcoating it: Bernie’s path to victory is narrow. But with a one-on-one debate coming up, which has the mentally foggy and politically risky Biden quaking in his boots, we lose nothing by pursuing that narrow path with total determination.

Who ever said it would be easy? Committed socialists have always taken for granted that our task will be difficult. We don’t panic and bail when the going gets tough. Most struggles end in defeat, though if waged intelligently they build our forces and set us up for future victories. Meanwhile, each struggle won secures real material gains for the working class, but also invites a vicious organized backlash that threatens to put us back at square one or worse. Socialists press on despite the adversity, because we believe it’s the only way to secure true equality and democracy.

Too many react to the present situation with self-pity when, after five decades of political marginalization, awe is more appropriate. Anyone preoccupied by the injustice of the fact that a democratic socialist isn’t the inevitable winner of the 2020 Democratic Party primary contest has already grown accustomed to an aberration in the recent history of the Left. In reality, it’s amazing that Bernie Sanders has a chance at all, much less a good one. It indicates a dramatic shift in the balance of forces — an opening we have a responsibility to exploit as relentlessly as we can. If we’re going out, we’ll go out a blaze of glory, having made the most of this miraculous opportunity to reach millions with the message that a better world is possible.

The passion of Bernie Sanders’s supporters is his campaign’s greatest strength. How we behave in the next stretch is critical. We should resist premature pessimism. Anxiety is natural, but morbid sulking and hyperbolic despair at the state of politics and the prospects for our movement are pointless and harmful. Additionally, now is not the time for punditry. There will be plenty of opportunities for recrimination and genuine introspection in due time. At present, nobody knows what’s going to happen, and predictions and postmortems are overconfident and irresponsible.

All of us are needed on the front lines. Keep canvassing if you’re in a state that hasn’t voted yet, phonebanking when you have a spare minute at home, and trying to persuade people who are undecided, just like we were doing all along.

Why wouldn’t we? What are we afraid of? Looking naive? That someone will embarrass us for not having seen defeat on the horizon and bent the knee? None of that matters compared to what’s on the line: a fighting chance to save the earth, a real shot at introducing social democracy in the United States, and an opportunity to use the Oval Office to raise ordinary people’s expectations and incite class struggle from below.

We should fight to the end for Bernie Sanders’s campaign, on the off chance that we might win a new beginning. And then, win or lose, we should be prepared to fight some more. As the great reformer Tony Benn put it, “There is no final victory, as there is no final defeat. There is just the same battle. To be fought, over and over again. So toughen up, bloody toughen up.”